Jess is 34-years-old, autistic, and blind. Her favorite topics of conversation include getting a new dog, her friend Keely, her Aunt Sue, and cousin Donna. Jess collects CD’s of children’s music, cards, coloring books, and has a small collection of used up disposable cameras that she refuses to get developed. Favorite health foods include chicken and rice, chicken tenders, chicken nuggets, chicken biscuits, pepperoni pizza, and hash brown potatoes. Jess has naturally curly hair that she would rather not ever comb, brush, or cut.

Jessica’s multiple disabilities stem from brain damage that occurred in-utero, and from hydrocephalus. In addition to autism and blindness, Jess also has minor fine motor and gross motor deficits. 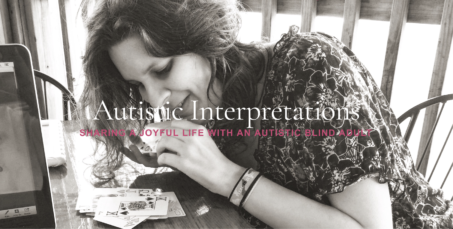 Jess was in public school from the time she was 4 years old through her 21st year. Individualized Education Programs (IEPs) were a way of life, and I attended a minimum of 40. Our family had strong support system that led to good information about advocacy and our Parents’ Rights.  We knew how to go into an IEP empowered and prepared.

Jess was on the cutting edge of the development of many special education services. When she was two, her primary diagnosis was cortical blindness. At that time (1989), school systems had not been required to provide special education services for pre-schoolers. We informed the school system that she would be attending public school in two years were told that local families usually sent their blind children to the state school for the blind (3 hours away from our home.) Our prompt response was that she would be staying here and going to school in our local system. We started having meetings with local and state groups, State Representatives, wrote letters to the Governor, and got involved with existing early preschool educational initiatives such as “Five’s Too Late.”

From that point on, it was firsts. Her first year in school (4 years old) she had the first Teacher for the Visually Impaired that the school system had ever hired. When the school year started, so did the teachers’ own education to become a certified teacher of the visually impaired. That teacher lasted one year. At the beginning of the next school year, Jessica’s VI teacher was another untrained teacher that had to begin training to become certified, and ditto the next year.

In Jessica’s second year of school, our county school system got its first ever special ed preschool class. Unfortunately, Jess didn’t have the opportunity to begin the year in that classroom. Apparently it wasn’t the right placement. I was told the students in that class had “greater needs”. So, for part of the year, she wasn’t in a classroom. She was just at a school, working with an untrained VI teacher, and having speech therapy.

SHE DIDN’T ‘FIT’ IN THE REGULAR ED CLASSROOM

The next school year, Jess didn’t fit into the typical kindergarten either. Her needs were too great. To be honest, she really didn’t fit in. Jess never did. Ever. Anywhere.

Early on, we questioned an autism diagnosis, but we were told by some education professionals, as well as medical professionals, that Jessica’s odd behaviors were “just because she’s blind.” It was a ridiculous statement. We had been around other blind children and surely this would be a huge insult to them. Jessica did not fit in with other blind children, and they avoided her as much as regular ed children did. Jess was unlike any other child we had ever seen.

JESS DIDN’T ‘FIT’ IN THE MOID CLASSROOM EITHER

Keep in mind that back then, for the most part, established programs for Autism did not exist within the school systems. Autism was not something people understood. If people even knew it existed, it was because of the movie Rain Man (1988).

When it was determined that Jess would not be in a typical Kindergarten class, she was then placed in a classroom for the “Moderate to Severely Intellectually Disabled,” a classroom setting that included a psychotic student who wore restraints most of the day.

The classroom teacher was a man in his last year before retirement – burned out and quite ‘old school’. One day, without reservation or any inkling of how offensive he was about to be, he said directly to me, “I don’t know why they try to teach these kids anything, they’re just retarded.”

I complained to the Principal, and then to the Superintendent to no avail. Nothing was done. He was “too close to retirement,” I was told. There was no other classroom in the entire county for Jess to be in, and I refused to continue to have Jess spend her days in that classroom. Instead, she was resigned to spending her days floating around the school, here and there, doing different things with different people. Oh yeah, and getting VI services from an untrained VI teacher.

GETTING COMFORTABLE WITH IEP’S WAS A MISTAKE

Next year, Jess had a new teacher in the same classroom as the previous year. By that point, I felt I was getting the hang of IEPs, so I went alone (without a support system) for the first time ever.

What a Bad idea!

In the IEP, this new teacher promptly announced, looking directly into my eyes, that Jess would never learn to read. Jess was 7 years old! It was the first time, and only, time I ever cried in an IEP.

The teacher was so wrong, but it had already been decided and that meant they were not even going to try. Being without my support system, I felt so alone and completely ganged up on. I politely but openly disagreed with them. Apparently, I didn’t know anything because I was just the mom, not a ‘professional’. They informed me that they knew better than me and I just needed to accept it.

My heart was broken, but I never quit fighting to prove them wrong. They hadn’t given her a chance. In the previous three years, she had three different uncertified teachers for the visually impaired (i.e. they didn’t know how to teach Braille), and a teacher that thought his students didn’t need to learn anything because they were “just retarded”.

However, they continued to refuse to put working on learning to read into Jessica’s IEP until she was in high school.

At the age of 7, Jess got her official diagnosis of Autism. We were able to change her primary disability to Autism. This had major implications for Jessica’s educational placement because it redefined her LRE (Least Restrictive Environment) in the context of the IDEA (Individuals with Disabilities Education Act).

We read as many books about Autism Spectrum Disorder that we could, did research, attended workshops, and went to a National Autism Conference. We even saw Temple Grandin give a speech at a conference. Jessica’s new diagnosis changed our approach to things at home and at school, and gave us new perspective.

FINALLY, AN AUTISM CLASSROOM, BUT GUESS WHAT…

Eventually one of the elementary schools in our county had a class for children with Autism Spectrum Disorder. However, we were told Jess was too old to be in that classroom, even though she was still in elementary school. Yeah, that again. Too young, too old, too normal, not normal enough.

The county middle schools didn’t have an autism class in place until the year after she finished middle school.

When she started high school, there was not an autism class there either. However, finally she was able to get into a blended classroom that worked well for her.

In her whole lifetime, Jess never had the opportunity to be in an autism class or program, or even ABA therapy. Even after aging out of high school and trying a day program, the placement was so inappropriate that we faced immediate problems which soon led to failure. This is why Jess at home and not in a program, and why I had to give up my career to be home and care for her.

After having to quit my job, I felt such defeat and self-imposed shame. The reason I started blogging was to defend how hard I had tried throughout Jessica’s life to get her the best education, services, and training along with appropriate placement.

The purpose of my blog morphed into being a place to share our every day life experiences since aging out of public school. My goal is to help other families gain insight and awareness of what everyday life experience can be like when living with a dependent adult-child with special needs.

Most of all, I want to you to see that we face frequent challenges and frustrations, but share even more joy, entertainment, laughs and good times. 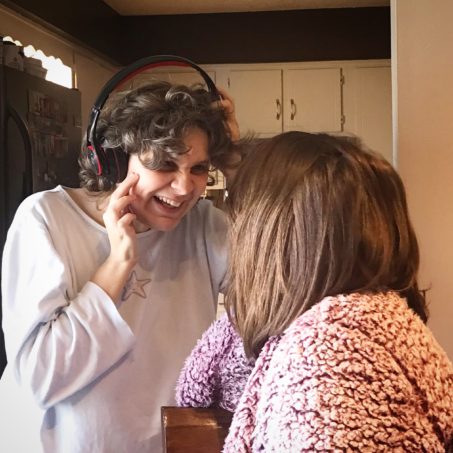