Jess was in the public school special education system from the age of 4 through her 21st year. IEP’s were a way of life. Our family had a strong support system that led to good information about being an advocate, and being aware of our ‘Parental Rights’. We knew how to go into an IEP empowered and prepared.

Throughout the years, the biggest obstacle we faced was an ongoing lack of belief in Jess’ abilities, most specifically, her ability to learn read, and to learn to read Braille. I believed in her. They didn’t. I fought that fight a long time, and they fought back.

Jess was on the cutting edge of the development of many special education services. When she was two, her primary diagnosis was cortical blindness. We informed the school system that she would be attending
public school in two years.

At that time, public school had not been required to provide special education services for pre-schoolers. Our special ed director suggested that when she turned 4-years-old, we send her to the state school for the blind (3 hours away from our home.) We promptly replied that she would be staying here and going to school in our local system. We began advocating by having meetings with local and state groups, State Representatives, wrote letters to the Governor, got involved with existing campaigns for early preschool education such as “Five’s Too Late.”

THE SERIES OF FIRSTS

From that point on, we continually experienced growing pains with the education system. Jessica’s first year, she had the first teacher for the visually impaired that the school had ever hired. Only, the teacher was not a trained VI teacher. When the school year started, so did the teachers’ own education to become a certified VI teacher. That teacher lasted one year. She decided being a VI teacher was not for her. The next year, they hired another, sent that one to get certified, and ditto the next year.

The second year of school for Jess, our system had it’s first ever special ed preschool. But she didn’t start off in that classroom. Apparently, it wasn’t the right placement. The students in that class had greater needs. So for part of the year, Jess wasn’t in a classroom. She was just at a school.

When Jess was the appropriate age for kindergarten, she didn’t fit in regular ed kindergarten either. Her needs were too great. Honestly, Jess really didn’t fit in. She never did. Ever. Anywhere. Early on, we questioned autism. However, we were told by education professionals, and medical professionals, that her odd behaviors were “just because she’s blind.”

Established programs for Autism did not exist within our school system back then. Autism Spectrum Disorder was not something people really understood. The way most people even knew it existed was because of the movie Rain Man (1988). So the next year, Jess was placed in a classroom for the Moderate to Severely Intellectually Disabled. This class included one student who was clinically psychotic and had to be restrained most of each day.

Jess didn’t really fit in this classroom either. The male teacher was in his last year before retirement. Burned out and ‘old school’ I would say. One day, without any reservation, he said to me, “I don’t know why they try to teach these kids anything, they’re just retarded.” ——— Yeah, he said that ——— I was floored.

I complained to the Principal, and then to the Superintendent. Nothing was done. The teacher was too close to retirement. There was no other classroom for Jess. I refused to have her spend her days in that classroom. Instead, the rest of that school year she spent her days floating around, here and there, doing different activities with different people.

First time someone said, “She will never”

Next year, same classroom, new teacher. During the school year, I made the mistake of going to an IEP meeting alone (without a support system) for the first time ever. Bad idea. Right off the bat, the teacher promptly announced to me that Jess would never learn to read. Jess was 7 years old.

It was the first and only time I ever cried in an IEP meeting. The teacher was so wrong! However, it had been decided, which meant they were’t going to try. Being without my support system, I felt alone and ganged up on. I openly disagreed with them. Apparently, even though they had no experience with teaching the visually impaired nor autistic children, they thought they knew better than me. They said I just needed to accept it. My heart was broken.

I never quit fighting to prove them wrong. They hadn’t even given her a chance. In the three previous years, she had three different uncertified teachers for the visually impaired (i.e. they didn’t know how to teach Braille), and a teacher that thought his students didn’t need to learn anything because they were “just retarded”.

Finally, at the age of 7, we got our official diagnosis of Autism as her primary disability. That change redefined Least Restrictive Environment as it applied to Jess. Reading as many books about Autism Spectrum Disorder that we could get our hands on became our hobby. Research, workshops, and a National Autism Conference filled our calendar. We even went and saw Temple Grandin give a speech at a conference. It changed our approach to things at home and at school and gave us a new perspective on everything. 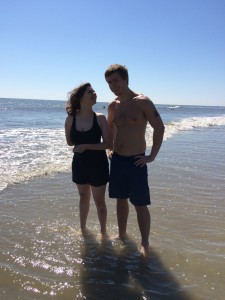 The purpose of this blog is to share our special education experiences leading up to transition planning, aging out of public school, and life beyond. What I hope to accomplish with my blog is to share an awareness of everyday life with my adult blind and autistic daughter. There are frequent challenges and frustrations, but there is even more joy, entertainment, laughs and good times.

Over the years, there was some success, many frustrations, and plenty of failures. And, delusions. I can say that now. It’s okay, because it is what helps us reach for more. Holding steadfast to my belief in Jessica’s abilities, even when many others in the educational setting did not, helped maintain a focus on a positive outcome and an expectation of success.

I believed that there was a place in this world where Jess could become a productive citizen. I believed that the world (or workplace) could be taught to understand her abilities and some wonderful things she has to contribute.

However, expecting it and counting on it are two different things.

The truth about transition planning from high school to the ‘real world’ is that it is a harsh reality. I believe the world is not ready for the huge population of autistic adults that are coming. I have come to believe that before the world can be ready, parents have to be ready.


Facing the harsh reality kind of ready. Parents need to accept that their adult may never ‘fit in’ to mainstream, may never be able to have a job, and in our case, not even find an appropriate placement at an adult day center.

Families need to plan ahead for that scenario. That is what I consider worse case scenario for us and that is where we have found ourselves. This worse case scenario will not be what all families have to deal with. My point is that we all need to be prepared for that. Then, anything else is a bonus, a success!

What I write in my blog is just my opinion based on my experiences.

Transition Planning and Aging Out