What are Biscuits and Gravy? This is a question I repeatedly get after Jess and I do one of our Saturday Biscuits and Gravy posts on Instagram. When you’re from the Southern U.S., you most likely have known the answer to this since you could talk. I would like to think that most Americans know this as well, but I’m sure there are some that don’t.

If you are from other countries, reading or hearing about biscuits and gravy may just be revolting. Even though I’m not a worldly person, I do know that in England, for example, “biscuits” are more like “cookies” and that is why many of our followers are bewildered with this dish. 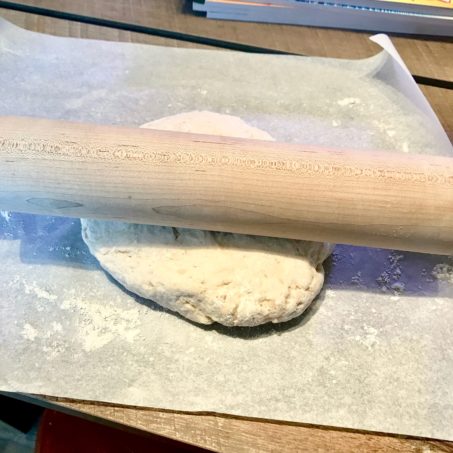 According to a Southern Living article titled “The Southern History of Biscuits” Southern biscuits evolved from the British version of a biscuit. Factors that led to the change in the biscuit were the necessity for speed, using sweet potato flour due to an abundance of sweet potatoes in the South along with shortages of wheat flour, and eventually the mass production of winter wheat flour by White Lily.

The biscuits that I grew up watching my mama make and that I make are actually quite simple. Flour, fat, and milk. The secret is in getting the right balance, the right texture of dough, and how it is kneaded (or not). I was never one to be picky about my flour because who has time for that? Not me. However, I recently discovered that using (organic) bread flour made an amazing difference in the texture of my biscuits. So, there’s that. 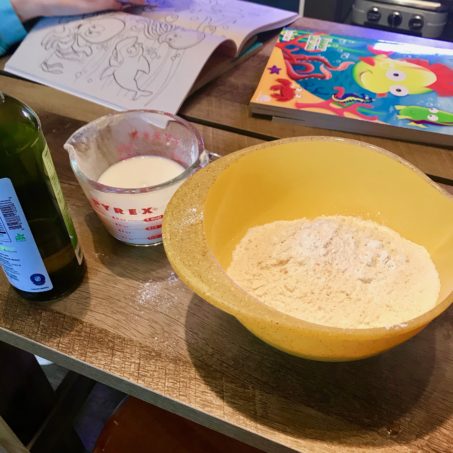 Now, About That Gravy

Coincidentally, the main ingredients for our gravy is flour, fat and milk. Different portions, different order of assembly, and absolutely a different type of fat. My children prefer gravy that is made with ground sausage drippings. The rest is just an art form – getting the consistency just right takes lots of patience and practice. Then, when the gravy is finished, the pre-cooked crumbled sausage is put back in.

Here’s a little secret – since I found out that I have an Hashimotos, an autoimmune disease, I care a whole lot more about what goes into my body. We buy all natural sausage to make our gravy. When I don’t have that or if it doesn’t cook off enough grease, I add avocado oil to make up the difference.

If you try out these recipes, please take a photo or video and tag us so we can check it out! 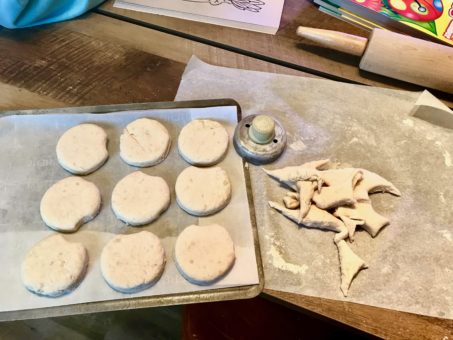 Here is our simple biscuit recipe:

Evenly cut the shortening or oil into the flour. Then, add the buttermilk all at once and stir until mixed. The dough is better when it is a little soft. If it is stiff after adding the milk, a little more can be added. This can be turned out onto a floured surface, rolled, and cut, or they can be dropped by spoonfuls onto a baking sheet. I almost always just drop them, sprinkle a tad of flour on top, then pat down a little to shape them up some. 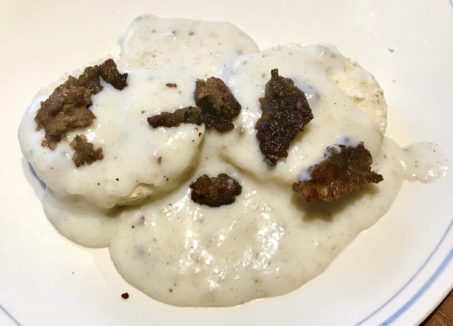 For the gravy, these are my mothers instructions she wrote to me in June of 1987 – one month before Jessica was born.

4 tbsp grease (we use sausage or bacon drippings)

1 tsp salt (I probably use more)

Blend flour, salt & pepper into grease and stir over medium heat until golden brown. Add milk slowly, a little at a time being careful that flour mixture is not too hot. Stir constantly until mixture comes to a good boil and thickens. All of the milk may not be needed.