I asked family and friends for help with my caregiving responsibilities, booked a flight, took my camera, and headed to places I hadn’t seen. I was a caregiver unplugged. My respite was a photography tour. The first stop  – Cape Cod, Massachusetts.

It was a fly by the seat of my pants kind of tour. A tight budget meant this was a sightseeing trip with no intricate itinerary. Because of my commitment to caregiving, this could be my only chance to go on a tour of New England. Main goal – see as much landscape as possible. I liked the freedom of taking things one day at a time and seeing where it led me – pretty much like my everyday life.

Saying I don’t like flying is an understatement – it terrifies me. My first flight was when I was a child. My dad was the pilot. The plane was small, maybe a four seater. The memory I conjure up is the small space around me; seat in front of me, window beside me, tension, and a terrible headache. I didn’t even look out the window.

When I fly now, a ritual helps me cope. It includes stress, then getting all my finances in order and telling Hannah how to find my life insurance policies if I die. Then, I feel ever so slightly better that at least something is taken care of. The second part of the ritual includes a prayer after I have gotten into my seat, then another as we take off. Then, truly, it is out of my hands and I feel better.

I lucked out and was seated next to a nice gentleman who was trying to get home in time for his son’s hockey game. He engaged me in pleasant conversation which helped me not be focused on my worries. As we neared the destination, he gave a narrative to what I was seeing out the window, and told me what to expect on our approach to the airport.

The information I gathered on this first stop helped steer the rest of my tour of Cape Cod.

Salt Pond Visitor Center has views of Salt Pond, Nauset Marsh, and the Atlantic, and has a museum. Theater films include:


Exhibits show the Outer Cape’s location in the Gulf of Maine ecosystem, and Wampanoag culture and history. Nauset Marsh,  Buttonbush trails, and the Nauset Bicycle Trail are nearby.

Nauset Marsh Trail (click HERE for Google map) includes a view of the Salt Pond, a dike originally built to “impound brackish water”, Nauset Marsh Overlook, the red cedars of the Cape, and an old farmstead. (National Park Brochure you can view HERE – it presents with 2nd page first.) 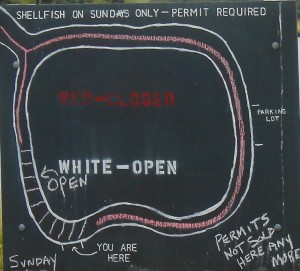 Salt Pond was originally a freshwater kettle, formed by  depressions left by receding glaciers of the Ice Age. Eventually, the ocean broke through and formed a narrow channel connecting it to Nauset Marsh. Twice daily it is enriched by tidal action, and Salt Pond has become a diverse community of marine life. Quahogs (pronounced ˈkō-ˌhȯg – aka – large edible clams), oysters, mussels, fish, shorebirds, plants of the marine environment, and animals all mark the change from fresh to saltwater. (about Quahogs…) 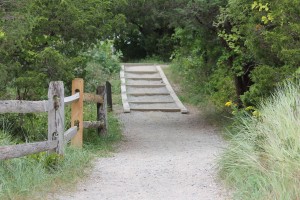 As I watched the people digging for clams, I was struck by what back-breaking work it looks like. Before I left the area, I saw a couple of older ladies walking up these stairs. They were carrying a bucket hanging from a pole. It was full of quahogs and looked very heavy. The park ranger said those ladies came every Sunday.

For this southern girl, it was time to move on – there was so much more to see. I now knew what was next on my agenda. Quahogs. It was time to go find a good spot to try out some of those clams.