Just what I (don’t) need – another adventure. Almost every day seems like an adventure already. I have been mentally preparing for a year. Throughout the year, Jessica has been warned that as we go through this new adventure I will lose my cool, and that I will possibly pitch a fit (or two, or three.) What is this ridiculous adventure? We are planning to get a puppy.

Jess has been obsessed with dogs forever. Interestingly, the majority of her life she was terrified of dogs. She was curious, wanted to know about them and talk about them, but not touch them. It was related to her tactile defensiveness. Jessica did not like to touch any kind of fur.

Then, Jess aged out of high school. She had no social schedule, no friends to go do things with, and I was adjusting to working full-time for the first time in over a decade. Jessica was really sad and lonely, and asked for a dog of her own. 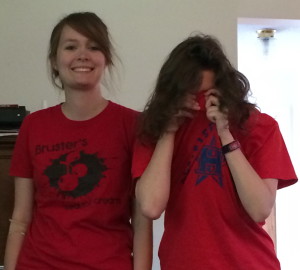 Finally, we went to shelters to look at dogs. I was afraid she would just want the first dog we visited. Jess proved me wrong when she wanted to look somewhere else after we visited two specific dogs. As we walked in the second shelter, she told the woman at the counter that she wanted a big black dog that didn’t bark.

The woman responded, “I have just the one for you.”

Next, the woman took us to a room to visit the big black dog that didn’t bark. Jessica eventually sat down in the floor. The beautiful black dog sat there calm as could be. No jumping, no licking, just sitting there evaluating us in return.

There was a problem though. Jessica was afraid to touch her.

I explained to Jess that dogs need love and affection. I told her we could not get a dog if she wasn’t going to be able to touch it and love on it. At that point, I figured we would be finished and would go home without a dog.

Then, Jessica did the most unexpected thing. After 22 years of fear, she leaned over and hugged a dog. It may be the bravest thing I have ever seen her do.

Trixie had been at the shelter for over a year. She soon got a new home and a new name. Abby. We came home and worked on bonding. Jess was amazing. So was Abby. They became great pals.

Abby has enriched Jessica’s life in many ways. The most important one being companionship that helps to reduce loneliness.

It was 2010 when Abby came to live with us and we were told that she was 2-years-old. But not so, says the vet. She is probably at least a couple of years older than we originally thought.

Abby is now probably at least 10-years-old. Of course, it is possible that she has some good years left.

On the other hand, she may not. She’s looking kinda elderly.

Last year, I decided we need a ‘transition’ pooch. I feel it will be easier for Jess to manage the loss (when the time comes) if she has another dog she has bonded with already. I decided on a puppy because I don’t want to inherit bad habits. Puppy training is important because of Jessica’s autism, vision impairment, and developmental disability.

Jess has reminded me almost on a daily basis that she is going to get a new pooch for Christmas. She has been decided for a while on gender, color, size, how loud it will bark, etc. Female, black, HUGE, and a loud bark. Those are her requests.

We will not be getting a huge dog, though. I don’t even want a big dog. Medium sounds perfect. Over this past year I have convinced her that a male could be okay if it seems like just the right dog. I have also successfully suggested that it could be colors other than black.

Jessica’s Christmas morning surprise is being carefully orchestrated – by Jessica. She has even told me where she is supposed to find the puppy that morning. Jess has been working on saving money all year long to help pay for food, toys, and a vet visit.  She has also been collecting dog toys all year.

Here’s the scoop! I need help finding just the right pup. Does anyone know anyone who has young puppies that need a home? I am quickly running out of time and am willing to make a road trip to look at puppies.  Info greatly appreciated!!