What led to vision improvement?

Jessica does not ‘look’ blind in her appearance nor when moving around in her own environment. When I have described Jessica as having cortical blindness, people hear “blind” and are often confused. “But she can see some, can’t she?” Well, yes she can. “What does she see?” We do not know. She has not ever been able to describe to us what she can see. Cortical Blindness is an older term and not used as often anymore. At the time of Jessica’s initial diagnosis, it was a completely appropriate term since she had no vision. Because Cortical Vision Impairment (CVI) is the more commonly accepted term now, for the purpose of my blog I will be using that term and abbreviation. 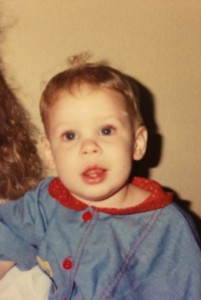 We know why Jess has CVI, but what caused the brain damage? Probably a cascade of things. At least two Neurologists stated that she probably had a stroke in utero causing an interruption in brain development, leading to brain malformation, leading to hydrocephalus, leading to increased pressure in the brain. Thankfully, our pediatrician had pressed for the surgery, and thankfully, the neurosurgeon was wrong in his initial opinion that a shunt would not help.

The good news was that sometimes with CVI there can be improvements in vision. We had first joyfully witnessed that with Jess when she had noticed the shiny balloon

and then noticed the coi

led cord hanging on the wall in the exam room. When we returned from Texas, Jess was 16 months of age. We took her for a follow-up at the The Walter E. Boehm Birth Defects Center clinic. A CT scan of her brain was taken and the neurosurgeon saw a decreased pocket of fluid compared to the previous CT. He also noted she was walking independently and identifying some objects in close range.

Jessica started back with Georgia PINES for early intervention services on our return from Texas. At 20 months, we (the family) had concerns that her vision had worsened. Fearing shunt malfunction, another CT was done with more surprising results. It showed an even smaller pocket of fluid. The neurosurgeon suspected her brain was developing in that area. Hooray for early intervention! Possibly that new development could be creating mixed signals. “Maybe this was a transitional phase in her visual development.” Hallelujah!!

Soon it would be time for an ASSESSMENT :-)This would be a good one though. We were so thankful there was enough vision to assess!

At age 2 years, 7 months, Georgia PINES referred Jessica for a Functional Vision Assessment. It was performed at the Atlanta Area School for the Deaf and the Diagnostic and Evaluation room. Some of the things noted included Jess

It was the vision specialist’s opinion that a planned program of visual experiences had the potential to further increase how Jess used her functional vision. The report went on to describe the planned program in detail. There were practical and wonderful suggestions that we were able to incorporate into everyday life, all day long. It was wonderful guidance and just what we needed. We took the suggestions and integrated them into our routines.

It wasn’t work, it was a way of life.

Next up… Guilt and Second Guessing