Let’s talk about parental guilt. Don’t we all question ourselves at one time or another?

Jess was born in 1987. She was beautiful and perfect. It wasn’t until 5 months later that we learned Jess was born with a birth defect. She has a malformation in the occipital region of her brain. Was it my fault ? The doctors told me it wasn’t.

But was it really? 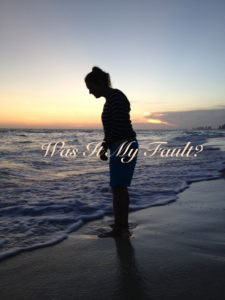 The medical term on her medical report was hydrocephalus exvacuo which describes what happens when there is damage to the brain caused by stroke or injury.

What would cause a stroke or injury?

Was it something I did, or didn’t do?

Doctors asked me if I was sick during my pregnancy. I answered, yes! I was sick for at least a week or more during my first trimester. During that time I lost 7lbs. I would go on to describe the illness, and the doctors would ultimately say that was not the cause of Jessica’s birth defect.

Doctors asked if I had a cat during my pregnancy. Yes! I did have a kitten late during my second trimester. However, there was no litter box involved. The docs would say that was not the cause.

Doctors asked about well-water. Yes! I drank well-water during my third trimester. Not sure why they asked, because they would then say this was not the cause of Jessica’s birth defect.

I was asked about family history, genetics, etc. There was nothing – no connection.

What if it was because I cried all the time, at least through the first trimester? The kind of crying that would often lead to vomiting.

Could it have been because I was a teenager and didn’t eat as well as I should have? I worked at a fast-food restaurant and ate there frequently because I got a free meal with each shift.

What if it was that time I fell while walking on a frozen surface outside. I slipped and landed flat on my back. It was a hard fall and knocked the breath out of me. I was scared.

Is there any chance that living in fear could cause a stroke or injury to a developing fetus? I was scared – scared of the life ahead of me, scared of being an adult too soon, and scared of being hurt. Scared, even though I was assured that the chair that flew across the room wasn’t actually aimed at me. Because, I was told, if it had been aimed at me, it would not have missed.

Maybe, I shouldn’t have been scared since that fist that missed my face, and hit the door instead, wasn’t meant for me either. (To be clear, this was not #baddaddy – I was a teenager in an immature, bad relationship.)

Does it matter if it was my fault? Does that change anything?

What if the fault WAS mine?

Why do some of us look for the possibility of it being our fault or not?

One possibility is that maybe it’s because as mothers we are meant to love, nourish, and protect our children. We have an innate need to know if we failed them somehow.

Another possibility is maybe we are trying to figure out what was meant to be. What if it was my fault and I altered this little person’s life forevermore?

I’m guessing that the reason we go through this personal investigation is more about the overall question of WHY?

Why did this happen?
Why me?
Why her?
Why us?

But you know what? Every time I work through this question of whether or not it was my fault, I always come to the same conclusion. Things are exactly as they are supposed to be for us. This is the Jess that was given to me. And, 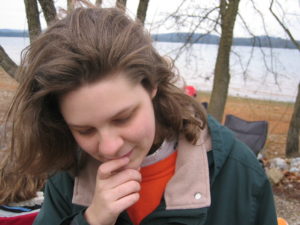 Do you have issues with guilt? How do you work through it?