In the summer of 2007, Jessica started a 7 week Work Adjustment Training program at Chattanooga Goodwill Industries. Each day she was dropped off at the facility. She had an ongoing vocational evaluation, which tested for interest level in different work areas, and also attended different job sites to practice job skills.

Results of her Vocational Eval showed top interest areas being Accommodating (Serving others, usually on a one-to-one basis) and Humanitarian (Helping others with their mental, spiritual, social, physical, or vocational needs.)  Her lowest interests included Physical Performing, Industrial, and Plants & Animals. 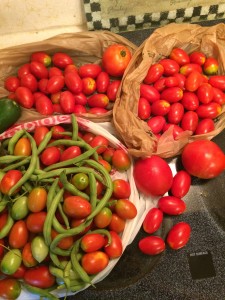 Ironically, one of her first job sites was at a farm, harvesting vegetables and, for example, shucking corn. Let’s be clear here. Jess is tactile defensive; She does not harvest vegetables, nor does she have the fine motor skills to shuck corn. When that did not work out, they tried giving her the job of delivering the corn to the people who were shucking the corn. This assignment was outside, and Jessica’s vision is much reduced outside. Since she was carrying corn, she cold not use her cane. Add to that her minimal attention span, and that did not work out either.

Interestingly, another job site was at the zoo. I’m pretty sure she was supposed to be shoveling mulch, or doing something mulch related. Since Jessica did not have the fine or gross motor skills to use a shovel, and cannot see when she is outside, and had 0.0% interest in handling mulch, no, that did not work out either. Other than some days in the retail section of their business, I am not sure what other jobs Jessica was exposed to.

Around week four, the group members were gathered in a room waiting on the instructors to arrive so they could have a meeting. According to witnesses, Jess began getting upset and pacing around the back of the room. With no one around to intervene, she eventually had an all out meltdown that resulted in raising her cane up and whacking the back of a chair real hard. Thankfully the person sitting in the chair did not get hit.

Instead of using the incident as a teaching moment, or doing some reflection of their program to figure out what was not working and how they could make it work better (like not leaving a blind and autistic trainee unattended in such a setting) Jess was fired.

That is what they told her. We were called to come pick her up immediately and were told she was out of the program and could not come back.

Who knew a person could get fired from a student work adjustment training program that was being funded by Vocational Rehab for the specific purpose of TEACHING job readiness skills? Especially a program in which Jess and some classmates had been recruited to participate. Especially a program with representatives who had gone in with eyes wide open, admitting that they were inexperienced in this instance. Especially a program with representatives promoting the idea that Jess was a viable candidate after already knowing she had, in their own words, “several serious work behavior issues” they were going to be working on.

Do I blame them for being startled by Jess going on the attack with her cane? Of course not. But, get real. Programs that are going to start including autistic individuals have got to be ready. They have to have training, be aware, know how to deal, and know how to approach de-escalating a meltdown that is in the works. It is often quite challenging to figure out what is behind a meltdown in action, but there is always a cause. It might not make sense to the rest of us, but the cause is always there.

Programs should not include, and then exclude. I think that is one of the most hurtful things. Firstly, just being different hurts. But being kicked out of a program for special people?

Not fitting in anywhere? Devastating. Again. A crushing blow to my outlook for Jessica’s future.