For a long time, I had been worried that when Jess got to the last years of her education, no one would want to continue working with her on academics. Mostly, the concern came from previous years’ discussions relating to transition planning and focusing on vocational goals. While I also had vocational goals for Jess, I still believed in my heart that we could make a breakthrough with literacy, that she still could learn significant academic data. My fears were eased a little at the IEP meeting the day before school started. The committee readily agreed to include things in her interim plan that made sense for Jessica’s future, including Functional Academics.

The first week of school, the agenda described the class starting a reading program. In conjunction with that, Jess worked on reading Braille and learning to use the Braille writer. Beginning Braille! Hooray!

Jess also received an abacus for her math lessons, and used a talking calculator to do math with dollars & cents.

Exploration of vocational options (including being a caregiver for the elderly) –

The first week of school, they talked about careers in Health Services! Hooray! This was so important to her and to us by validating her interest, and encouraging an avenue that could lead to a career. This time, unlike a year and a half before, there was not a narrow-minded person who could not think outside of the box telling her she could never be a caregiver.

She would have an opportunity go work with the vocational program, potentially getting to experience several different work sites and get some practice developing job skills and work habits.

I was so thankful to be able to have these things worked on at school in addition to what I tried to do with her at home. Me working with her on it = nagging & same old thing. Working on it at school meant different approaches, different people, different activities… potentially fun and productive.

Working on her signature

Being able to sign would be needed for important papers including job applications.

Jess loved to interact with people and enjoyed dictating emails to us for her to send to friends and acquaintances. Learning this skills would be an important leisure skill. 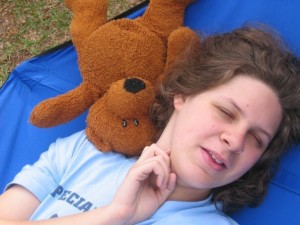 The second week of school included a 2nd lesson in reading, new sight words, picture day, and planning a cookout at the end of the week as a follow-up to the reading lesson. Jess ended up inviting the Principal to join them for their cookout. When he came, she got to explain to him that the campfire was based on a story they read in reading class. She was having fun!

Something else fun was happening with Jess and that was P.E. class. She was playing ball with peer facilitators, including playing kickball. She was also playing (bouncing) basketball with a girl who was in her class. She was making friends! Sort of. Much of the time there is no middle ground for Jess. Often, she will like someone a whole lot, or pay them very little attention at all. Then, she gets so attached that it becomes a source of nearly constant anxiety.

By the end of the second week, I wrote a question in the agenda asking if she was becoming obsessed with someone (oops, forgot I am not supposed to use that word. it is a bad word in our house per Jess.) Okay, I will say ‘overly attached’. At home, we were hearing Jess talk about a specific girl frequently. She happened to be the only other girl in the class. Jess usually did not care a whole lot about interacting a lot with boys.

Jess becoming ‘obsessed’ with her new friend would not be a surprise. That was a problem we had seen before with other people (usually adults because Jess had not had any friends her own age.) If she became overly attached again, that would become a source of stress for everyone, not just at school, but at home too. In the meantime, it was great that Jess was actually making some friends that were close to her age.

The overall really good thing was that Jess was enjoying school. She was surrounded by an entire school staff that was loving and supportive. She was enjoying making friends, and learning good stuff. Luckily, that was just week two. 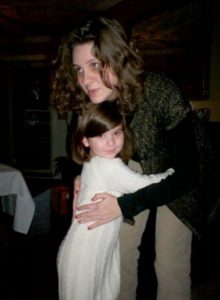