Zero birthdays are a big deal, apparently even for Jessica. Everywhere we went, she announced – not that it was her birthday – but instead that she was “30-years-old today!” 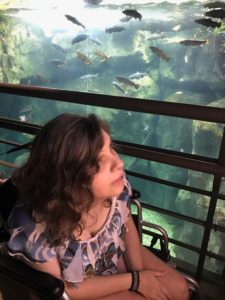 Mid-birthday, we had what I consider to be a significant breakthrough about gifts. This year, she learned about gifts that cannot be wrapped and she totally bought in.

How Many Presents Did You Get Me?

Forevermore, Jessica’s focus has always been on the number of gifts she gets to unwrap. As a small child, that can be acceptable. As an adult? It becomes awkward. She can become so focused on how many packages she’s expecting that it actually causes stress for other members of the family (not to mention the directness of asking “how many presents are you going to get me” is pretty rude.) The issue that goes along with those gifts is the kind of things on her wish list: more cards, more CD’s, more games she will never play, coloring books to add to her collection, crayons that she doesn’t use anymore, and baby toys.

About a week before Jessica’s birthday, I had a moment of thinking I was up to having a big family party at my house. However, a few days before her birthday, I changed my mind. I suggested to her that she and I spend the day together doing fun stuff out in the community instead of having the big party that we already had planned. I assured her that she would still have some packages to unwrap. Jess did not immediately say, “no” like I had expected. Instead, her question was:

We would go birthday shopping, of course. Next, we would be eating out and making a stop at the adoption day at the pet store to listen to dogs bark.

The big one? I told her I would take her to the Tennessee Aquarium. 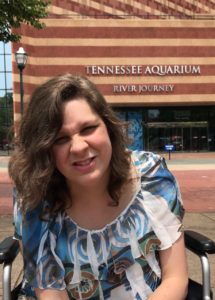 Jess was sold on the idea. She loves to go to the aquarium, and we hadn’t been in a long time. She readily agreed to canceling the party and instead spending the weekend with me doing fun stuff. To be honest, I was shocked that she agreed to cancel the party.

When the weekend rolled around, I dedicated every moment to her. Saturday, we shopped for birthday presents. We ate out, listened to dogs bark, bought groceries, and then I made an ice cream cake. Finally, she stalked me while I wrapped the packages.

Birthday morning I was greeted in the cutest of ways. I dragged my sleepy head out of bed and headed up the stairs. As soon as Jess heard me coming, she started patting herself on the cheeks and in a playful high-pitched voice said, “Mama, you come up here and see your birthday girl!” She was bubbling over with excitement.  We opened packages first thing. A little later, she opened more packages at her dad’s house. Then, we ate ice cream cake. She was one happy camper.

Finally, it was time for the biggie… the “Fish aquariun,” as Jess usually calls it. It was a mother-daughter only outing. As always, the wheelchair was invited to tag along. And yes, that is her favorite part. Just like with Disney, the most important part of the trip is getting to go in the wheelchair. 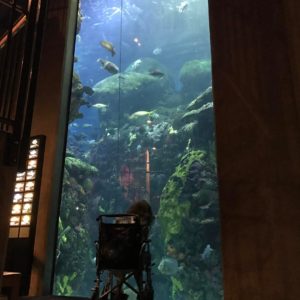 The Tennessee Aquarium has four levels and two buildings to explore. Within much of the building, there are areas of darkness, and also ramps that wind through the middle of the building. For Jess to navigate on foot would be difficult and exhausting for both of us.

Jess pretty much self-talked nonstop once we were inside and making our way through. She announced her birthday to a volunteer who then hooked us up for an impromptu behind-the-scenes tour of the aquarium. She even got to feed grapes to some fish and turtles.

This is a video compilation of our aquarium visit. Jess has a cortical vision impairment. She can see the movement, especially with the bigger fish, but she cannot see most of the details of the exhibits. So, I tell her what she is looking at. One of the things that excited her a lot was when I would tell her an animal that she remembered being in the coloring books that we read. If you listen, you can hear her talking about being 30, doing special things, coloring, and visiting other aquariums in the future…

The really awesome and cool thing to me was that she kept saying to herself what a good idea it was to get out and do special things for her birthday. She actually told me she was glad we were doing special things instead of having extra presents and a party.

Gifts That Cannot Be Wrapped

I seized the moment to explain that gifts that cannot be wrapped are the best kind. She heard me and was interested. While I had her attention, I took it a little further. I suggested to her that in the future when people were trying to figure out what to get her as a gift, she could tell them that she would like gifts that cannot be wrapped. That triggered her cute happy little spastic body twist, fingers up to the face right in front of her nose for some serious tapping – the happy stimming.

“Like what, honey?” she asked again with a dimpled grin on her face.

Jessica dug a little deeper to make sure she understood what I was talking about. She wanted to know what special things she could do. I gave some examples of places she could suggest going or things she could suggest doing. I even suggested that she start a new tradition and visit a new aquarium each birthday. She was excited and announced that in the future, she was going to ask for gifts that can’t be wrapped. The idea of getting to go out into the community to do special things made her happy. Throughout the rest of our visit to the aquarium, Jess talked about the concept of presents that can’t be wrapped and new aquarium traditions. 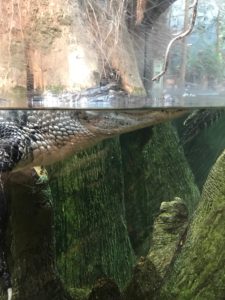 The New Concept In Action

After our visit to the aquarium, we walked to dinner. An uncle and aunt joined us. “Nathan, come here!” she said. Then, instead of asking him how many presents he got her, she asked, “Did you think of something special we can do?” They proceeded to make some fun plans.

When the waiter came by, she announced, “It’s my birthday and I am 30-years-old!” He told her he would be sure to bring her some cake.

She admitted that it was her best birthday ever!!

What To Take Away

For parents of younger children, I encourage you to always continue expecting change.

Maturity makes a difference all along the winding road. Jess continues to grow and develop in all areas. Lately she is even doing better with verbalizing her feelings. It has been so surprising that I literally had to pull the car over one day so that I could soak it in. For Jessica, this birthday brought along with it an understanding of the value of experiences versus the value of a gift that she can hold in her hands and unwrap. Not only did she understand, but she embraced it.