I was on a photography tour, a respite from my caregiver responsibilities. A sightseeing trip with a loose itinerary, taking one day at a time to see where it led me. (read part-1 HERE) My collection of brochures was in its early stages after stopping at Salt Pond Visitor Center on Cape Cod. I found the one that was to be the inspiration for my next stop and many stops afterward. Something in it quickly caught my attention. An article about the gray seal and Cape Cod Great White Shark Safety.  Seals and Great Whites! Watch for one, beware of the other. Prey and predator. Okay, cool!! The seals are sometimes seen at the nearby beaches. Coast Guard Beach was just a hop, skip and a jump from Salt Pond so I headed that way. 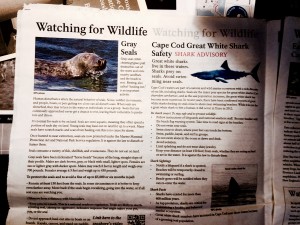 In my brochure I read, “In recent years, there have been confirmed reports of great white sharks feeding on seals close to shore near swimming beaches.” In 2013, someone got bitten by a great white at a nearby beach in Truro. There were also warnings on the beach about great white sharks.

I only had to get far enough for my line of sight to crest the dunes and there they were, dotting Coast Guard Beach almost as far as the eye could see!

They weren’t very active and appeared to just float in place. Occasionally it seemed they were just staring at me.

Seals were once hunted to near extinction. Now, protected under the Marine Mammal Protection Act and National Park Service regulation, the seal population is increasing. There are rules and regulations published and on display to help keep the seals safe from human disturbance, which can leave them vulnerable to predators and illness. Speaking of predators…

Call me cruel, but I have to admit that while thrilled and fascinated by watching and photographing the seals, I couldn’t help but secretly hope to have a Mutual of Omaha’s Wild Kingdom kind of moment. (I know, the wild kingdom comment gives away my age.) I didn’t even mean a moment for my camera. I just meant me actually witnessing a great white bolting up out of the water to capture and eat a seal.

Never fear, no such thing happened. Probably a seriously good thing because, in reality, it would have been absolutely terrifying and I would have never ever been able to go back into the ocean again. Ever.

After watching for a while, I resigned myself to the fact that I was not going to witness any such grandeur as the wild oceanic food chain in action. My attention then turned to more mundane details such as how this New England beach is different from my sandy white beaches of the Florida panhandle.

Instead of fine white sand, these grains of sand seemed heavier, smoother, and maybe a bit larger in diameter. My feet sunk down into the sand a little deeper and in a different way than I was accustomed to.  Instead of broken sea shells, this beach had a variety of beautiful smooth rocks.

Along the sand in some places were these clear things that, at a glance, looked like someone dumped out some ice chips. That is about how big they were. Obviously, this made no sense, so I assumed they were jellies. I didn’t want to touch and find out so I didn’t. But, after some brief research and reading I believe they may be called Sea Gooseberries, a kind of jelly. 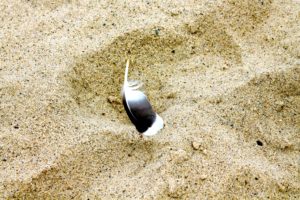 I hated to say goodbye to the seals and Coast Guard Beach, but alas, I had to move onward in my quest to find sustenance (a.k.a. clams) and decide where my journey would end for the day.

Not far down the road I found Arnold’s Lobster and Clam Bar. 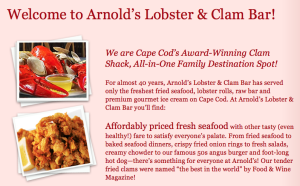 I have to admit that for the most part, I am not a seafood 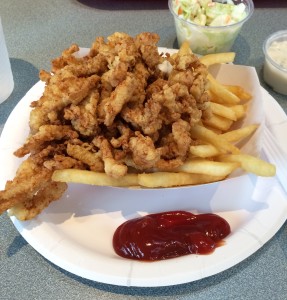 eater other than fried clams and shrimp. But these clams were just what I had been hoping for. Fresh and Delicious!

Now… decisions, decisions. Where to go to wrap up the day and search for a perfect place to watch a perfect sunset…