Home/Blog Post/My Life as a Nurse

I am a Baccalaureate-prepared Registered Nurse. 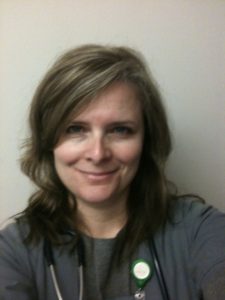 Even though I am not currently working in the field of nursing, my license is still active. I would love to be back in nursing. As I explained in the later posts of Jessica’s Journey, the work-life I was leading did not jive with my home-life needs and requirements. Each job, work and home, required so much focus and attention that I could not give them both the dedication they required at the same time.

Even now, with Jessica’s waiver in place and a full-time schedule of care for jess, I cannot figure out how I could go back to the 12-hr shifts of bedside nursing that I loved. It required leaving home by 5:45am, which meant getting up by 5:15am just to get me ready. If I had to get Jess up and get her ready it would be 4:45am. Then what? Who is going to want to keep her at 5:30am and have her until 8:00pm? Yes, 8:00pm. Shifts end at 7:00 but not really. That’s when report is given to the next shift. That is when nurses try to catch up on all the things they still have to do that they haven’t had time for yet. When a patient emergency happens at shift change, it doesn’t matter what time it is. I had one day where I was at work from 6:30am until 9:00pm.

I can’t even explain the number of times I had people reference, “But you only have to work three days a week though, right? Making that big money.” Nope, that is not right. That’s not how it is at all. ‘Only’ three days means taking most time off to recover mentally and physically. It often means being too tired for enjoying the company of friends and family.

This excellent blog post by Brie Gowen is a wonderful depiction of exactly how it is. Please read it to understand what huge responsibilities bedside nurses have on their shoulders at all times, and understand how tired they are.

I was sitting at my computer screen, entering orders for a physician, and trying not to forget what he had said since I had neglected to write it down. I was charting my note, mentally taking inventory of all the tasks I had accomplished and problems I had identified and reported. My eyes felt gritty and my mentation frazzled. I glanced at the time on my computer screen and was taken aback that seven hours had flown by so quickly. Then I realized with dread that I hadn’t documented a single thing on my other patient. I was so behind!

And as my sand-filled eyes started to water in the frigid air of my surgical ICU I realized I was beat. I was exhausted. Yet I had not been working all week. It was my first day on shift in two weeks! I knew, though, that nursing wasn’t so much exhausting because of the hours worked, but rather the work that was performed.

Yes, twelve-hour shifts actually turn into thirteen and sometimes fourteen hour shifts, and by golly yes, that makes for a supremely long day! But you only have to do that for three days, right? Maybe four. The rest of the week you’re free and off jet-setting the country, leaving a trail of money in your wake as you go.

More like curled up under the covers in a dark room, recovering from a mental and emotional hangover much worse than one caused by the cheapest of Tequila.

As I sat at my computer screen fighting my mental and physical fatigue I knew the reason I was utterly exhausted, and although by most career standards my day should be coming to an end, it wasn’t even my lengthy shift still looming that made me want to wave my white flag of surrender. My patient was critically ill, and as such I had not stopped.

I remember in high school I ran track. Never one for speed, I was more of an endurance runner, and as a long-distance runner I can recall the trip around the half-mile track. After so many loops you’d get to a point where you were done. You were finished, in your mind and rubbery legs, and you felt certain you could go no further. You’d strive for that line up ahead that marked the finish, head down, legs pumping, and when you got there you’d realize you still had one more lap to go. One more lap, you’d whisper encouragingly to self, and by sheer adrenaline you would continue.

In few other fields will you find that the moment you hit the wall does not matter. Like a soldier into battle (and as a veteran I think I can speak on this), a nurse holds life and death on the line, so when your brain becomes fried and your body becomes weary, you just keep marching to the drumbeat of beeping IV pumps, shrieking monitor alarms, and persistently cruel call lights.

Nursing is exhausting for so many reasons, but the biggest being the task at hand. You work within the confines of time, pushing the limits to complete an enormous workload with minimal support staff available, all the while carrying a small library of knowledge within your overloaded brain, realizing that an error on your part could be detrimental.

You complete one job and another comes along, and much like an assembly line worker in a factory you keep going to prevent the great machine of healthcare from going on the fritz. Yet you also know if your machine stops so does someone’s heart, and if that’s not mentally draining then I don’t know what is.

So even one full day as a nurse, especially on a tough day, can seem akin to purgatory. That’s not to say that being a nurse is similar to torture, but anyone who’s begged the time clock to bring along the next shift knows exactly what I mean. You see, when you’ve mentally thought your way through keeping someone alive as long as your fizzled out mind can handle then a ten hour break away from the bedside seems like a much needed respite.

And yes, even working “just” three days a week is utterly exhausting.