Loners out there – I understand 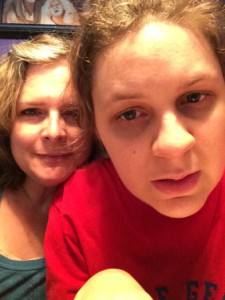 I am a loner. I understand not seeking out social outings, social groups, and support systems.

Today I was reflecting on something I read about on another autism blog. A pep talk to self – “you’ve got this”. Positive self-talk is important and useful. It can rewrite your internal script, give a confidence boost and decrease stress (which leads to being healthier).

I realized that I don’t remember giving myself positive pep-talks while raising my children and going through my educational journey with Jess. All I can remember is the push to get through each day. I remember it being exhausting. My favorite part of each day was putting the kids to bed as early as possible so that I could go to bed and go to sleep. That was my survival mechanism.

In today’s world of social media and blogs, knowledge and support is just a click away. Autism moms can quickly find each other and share support and encouragement. Maybe it helps them feel a little less alone on their journey. They learn that there are others out there that understand the everyday challenges autism families face. I had to ask myself, “why don’t I do that? Why have I never reached out? Is it simply because I am a loner?”

My first inclination is to say I don’t need that now. Why would I say such a thing? Conceited? No. An expert? Hell no. Got it all figured out? Not really, but I’ve made excellent progress – with my OWN situation. And I got where I am by stubbornly pushing onward, fighting through, because there was no alternative.

But, is there more to me not reaching out than that? Yes, I think so. Jess was born in 1987. Consider this timeline:

1987 -“Autism disorder” became a diagnosis and the first study was published connecting intensive behavior therapy and autism. Therapy of 20-40 hrs per week would become available on the Pacific coast for about $50,000 a year.

1988 – “Rain Man” was released – increasing public awareness of autism. Why a movie to introduce public to autism? Because in 1988 there was no public world wide web. No blogs, and… ‘gasp’… no Facebook.

2006 – Jess turned 19; Facebook became available to those with a valid email address.

The point is, when Jess was growing up, the world was a very different place. She was so different from anyone we ever met. We attended an autism support group once. It felt weird. We felt out-of-place. We never went back.

Actually, pretty much all social groups felt weird to me. My life was so intensely different from those of my peers. I had difficulty connecting to people. I couldn’t relate to a ‘normal’ life. Even with social groups revolving around my two typical children, I felt like I did not belong because I felt like no one could possibly understand the stress I lived under, the restrictions that I had on me, and how happy and special every day occurrences were all diminished or invisible to me.

I never tried to explain, I did not want it to sound like a complaint nor an excuse. No one ever excluded me, I did that to myself. I was more comfortable alone. But that doesn’t mean that I wasn’t lonely. I was terribly lonely for many many years. But it was still my choice. It was the path of least resistance; the easiest.

Thus, a loner. Was I always a loner? Or was it my circumstances after Jess was born that led to me choosing isolation? Maybe both.

However, I am no longer lonely. I feel content. I have seemed to have finally made it through the hardest parts of Jessica’s Journey. I still don’t reach out much to other people and I have not utilized the internet to connect to other people in similar situations. But, I finally feel like it’s possible that my family, friends, and neighbors understand where I’ve been and what I’ve been through.

Ironically, the thing that has finally let me have a voice and open my world up is writing this blog, (something I can do without having to worry about fitting into a group…lol)

Are there other parents out there that are loners because they feel like they don’t fit in and can’t relate, even within support groups?