Jess is autistic and blind. She has hydrocephalus and was born with a brain malformation. She is verbal and her receptive language skills are good. However, her expressive communication is a challenge, especially when it relates to emotions.

Jess does this thing when she’s worried, anxious, or upset about something. I refer to it as her negative talk. She has this amazing ability to instantaneously make up a negative scenario.

It lets us know SOMETHING is wrong, just not WHAT is wrong. Jess doesn’t know how to express her generalized anxiety or what she’s upset about. Instead, she thinks of negative things to connect the feelings with.

She went through a stage for many years where she had a specific go-to explanation for every time she was upset. Literally, anytime she was asked why she was upset, the answer was, “I miss Chris and Carla,” (family members who had moved away). She said it so sincerely that if you didn’t know Jess, you would totally assume that was the real issue.

When Chris and Carla moved back to town, that explanation didn’t work anymore. Now, the reason mostly seems to be random comments.

We were recently preparing to go to a birthday party, and Jess was in one of those negative talk places. She knew the people who were going to be there, she likes the food we were going to eat, and she likes getting out and going places. So, what was her problem? Was she worried, anxious, upset?

Over the years I have learned that I can get clues by asking questions, and I eventually get an idea about the real issue. In this case, I eventually figured out that one of her issues was that we were going to be riding with someone else rather than me driving.

There have been times in the past where I saw her trying to get to the front seat before her sister, but I didn’t put too much thought into it. She has never expressed to me that she wants to sit in the front. 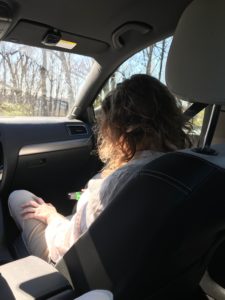 Jess usually ends up sitting in the back seat when we are with other people. Think about that for a minute. We generally assume children are going to sit in the back seat, adults in front. She’s my child, but an adult child. It makes sense that she would want to be in the front, just like the rest of us do.

When she sits in the back, she can’t see as much as she could if she were in the front and looking out the windshield. Also, it’s harder to engage in conversation from the back seat. There is not access to control temperature or music.

I think she feels left out when we are with someone else and she ends up sitting in the back seat. When it’s just the two of us, it means she’s in the front. We converse, interact, and she can see me. She has my attention. She turns on music and adjusts volume as needed based on our conversation. If she gets cold, she closes the a/c vents.

But she has never been able to use expressive communication to tell me any of those things.

The reason I wanted to share a video like this is because I think it’s a good example of how I try to work through situations with Jess that could otherwise lead to a meltdown. Also, I think this video demonstrates how Jess can emotionally struggle even with an event that she’s looking forward to, work through the emotions, and then end up enjoying the event. 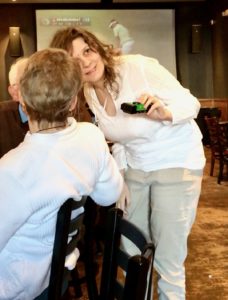 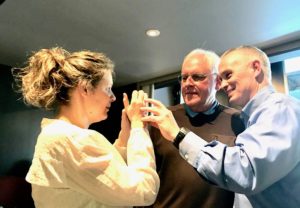