A Fence and A Paver Patio for Jess

In 2012, I decided to claim my backyard by putting up a fence and building a paver patio. For two years, I had been having to walk Jessica’s stubborn dog through the neighborhood at least twice a day. From the day we rescued her from a shelter, she wouldn’t use the bathroom anywhere in our yard. Sometimes that meant walking her at 5am before I left for work. It meant walking through the neighborhood in the dark, in the pouring down rain sometimes. It meant Jessica couldn’t walk her by herself. Even after we got the dog to where she would sometimes go in the backyard, Jess couldn’t navigate the backyard with the dog on the leash because of the degree of the slope. 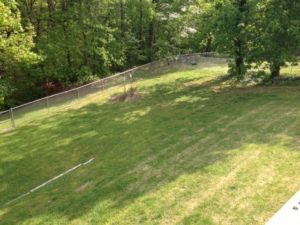 The first step was to fence in the backyard. Due to practicality and affordability I chose a chain-linked fence and three single gates. Getting the fence up helped with letting the dog out, but the back yard was still not Jessica friendly in terms of navigating. Immediately off the back step outside of the back door was where the slope began on an area of ground that was rocky and not very grassy. I was afraid she would slip on the loose gravel and fall.

I began researching and comparing cost and ease of building a deck versus a patio. I searched pinterest for ideas and found leads on how to build a paver patio. After watching several how-to videos similar to this one from Home Depot, I determined it was a project I could take on and manage myself. By building it myself, I would save money on labor and also be able to buy materials as I went instead of all at once.

When choosing the size of my patio, I decided to duplicate the size of the deck that is immediately above the area. The very first thing I had to do was level out the ground. Instead of hauling in dirt, I shoveled and moved dirt from the highest part of the slope that was up against the foundation of the house to the lower edge of what was going to be the patio. 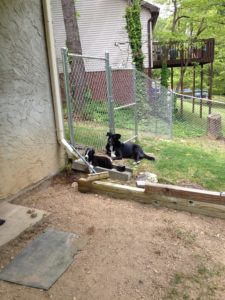 Since I was working on the project over a period of time, I divided the space in half at this point to get a level, cleaner spot for us to walk on. 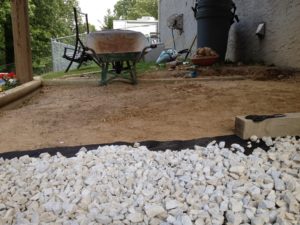 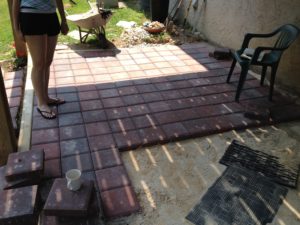 I began this project in April 2012 and completed it by July 2012. Although that may seem like a long time to get it done, I did this project by myself while working full-time, going on a couple of vacations, and taking a summer college class.

Between adding the fence and the patio, it was like suddenly we had a backyard that we had not had before. Now, it was a much more pleasant and useful space. Most of all, for Jessica, it is a great place to go out to and check on her dog, and an even better place to have her water days.