“…you realize…you’ve got to keep your promise ‘cus you’re a grown up and shit!!” @autismandlove – instagram

It is a trust issue. Jessica needs to be able to trust that I mean what I say. We go through episodes of anxiety and panic, worry and stress, multiple times a day. Jess needs to believe me when I tell her things to try to soothe her and alleviate her fears. Over a year ago, I made a promise to Jess to get her a dog. The truth is that I did not want to keep that promise when the time came.

That promise went a little further than getting a dog. It was a puppy promise. My big bright idea. A puppy. About that…

The Reason Behind Choosing A Puppy

Jessica’s autism, vision impairment, and tactile defensiveness makes it imperative to train a dog to have the habits we wanted, and avoid the habits we didn’t. Starting with a puppy would mean that Jessica’s new dog would not already have unfavorable habits that would need to be unlearned.

A Promise As A Motivator

Parents do it all the time. The promise of rewards. During this past year, I used the puppy promise as a motivator. Jess has a serious skin picking issue. Nothing else I tried had been a successful long-term deterrent. One day when I was at my wit’s end, I declared that we were not going to get a puppy because even with the puppy promise as a motivator, she could not stop the skin picking.


I found myself suddenly relieved that I was now excused from having to fulfill my puppy promise.

But alas, Jessica knew I meant business and finally stopped picking. I had ‘promised’ myself into a corner and now had to follow through even though I 100% dreaded it. The timing was poor. It was holiday season and as things would turn out we were also going to be moving Hannah to college the week after Christmas.

Temperament was critical to a successful bond between Jess and the dog. For months I had made a sincere effort to research breeds and then use that info to search for a mix breed to rescue. I did the research but then finding a specific mix to rescue was not successful. The deadline for my promise was looming. Eventually, a cutie pie from a local shelter seemed like she could be the right fit. 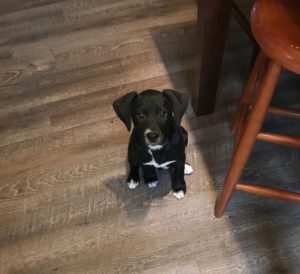 Was It The Right Fit?

We were determined to make it fit. It was a puppy after all and that puppy could be trained, right? We just needed to be patient. Jessica’s level of enthusiasm the day she met the puppy was less than I had expected.

Happy? yes. Excited? I couldn’t tell. Jess was very timid and scared to touch the puppy. Every day we worked on adjustments and acclimating. The progress was slower than I had anticipated. Jess liked talking about the puppy, liked the idea of the puppy, but wasn’t comfortable with the puppy.

We gave it time. For six weeks, we did puppy training while helping Jess try to adjust. During those six weeks, I learned plenty about the puppy, Jess, and myself.

The puppy turned out to be a high energy mixed breed that bounced off the walls until the last moment when she collapsed for a nap. 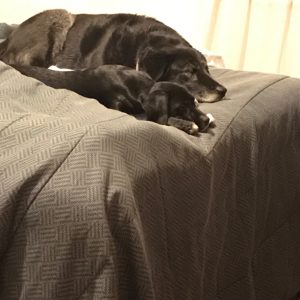 We have a fenced in back yard so no problem to let her out to run off some energy. Right?

Wrong. The puppy didn’t just chew on things like all puppies do. She ATE everything. Anything – like plastic, metal, wood, screws, dust bunnies, hair, Abby, dirt, cat poop, rotten tomatoes in the garden, shrubs, etc., I couldn’t let her out off-leash to run off energy.

I had fulfilled my promise. Jessica, on the other hand, hadn’t kept her part of the bargain. Literally, the day after we got the puppy, she began skin picking again. Also, Jess was not making progress with her effort to stop being afraid of the puppy. She made a great effort, and reached beyond her comfort zone.

It just wasn’t happening. At night when it was bedtime, Jess wanted me to put the puppy on her bed for a few minutes. Each time I did, Jess would try to be still to prove she was trying. At the same time, the puppy would bounce up to Jessica’s pillow and stick her snout all over Jessica’s head while Jess tried to bury herself under the covers, saying “No! No! No!.”

This Was Not The Right Puppy For Our Family

Jess was informed by me that this was not the right puppy for our family. Needless to say, she was pretty sad about it. Having to tell her that made me feel like a total failure.

After I told her, a lot of self-talk ensued. I kept hearing her talking about how she needed her own house so that she could have dogs. To prove a point, that morning, I (briefly) turned over complete supervision of the puppy to Jess.

Jess Was In Charge of the Puppy

That’s what Jess thought anyway. That puppy knew immediately who had the upper hand. The pup went to Jessica’s bedroom and got one thing after another of Jessica’s belongings and brought them to the living room to start eating. She made an effort, but as Jess tried to retrieve each item, she struggled to make herself reach out to the puppy.

Jess was so tentative and unsure with the way she was reaching out to the puppy. There was no way the puppy would know if jess was playing or not playing. The biggest problem was that the puppy knew Jess had no confidence. The puppy had the upper hand. That would never work

On Jessica’s last try, the puppy snapped at her.

This was not the right puppy for our family. Now, I could explain the situation in a way that Jessica could understand. The puppy and Jessica were not bonding. Jess was afraid she would get bitten.

As I do with all big decisions, I talked to my family about our situation. They gave me the courage I needed to make the difficult decision to return the puppy to the shelter. The puppy was so cute. So adorable. I had bonded with her and loved her. Yet, the day I returned her to the shelter I felt instantaneous and MASSIVE relief. It proved to me that I made the right decision to return her.

She Was Not The Right Puppy For Our Family, But I Had Fulfilled My Promise

Since that time, it is the 100% truth that I am still trying to catch up on my sleep. My backyard is still a total mess from the puppy’s destruction, and Jess is still trying to pin me down for when we can get another dog. My answer is very carefully and deliberately worded each time.

“When the time is right (which may be never) and when we find the right dog.” But, definitely not another puppy promise!

It is up to me to make rational and good decisions for our family even when it will make Jess unhappy thus making my life hard.

But not as hard as life with a puppy.