It is okay to ask for an independent evaluation

At this point in my story, Jess was 7 years old. Three years had slipped away since I had overheard the word ‘autistic‘ at the school for the blind. 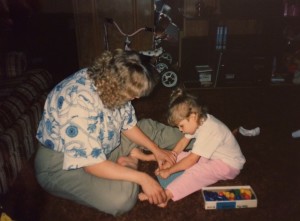 We had just received the result of her testing at school where she had been labeled as Moderately Mentally Intellectually Impaired. We were so upset about Jessica’s latest evaluation, we vehemently protested the results of the testing and insisted that report not become a permanent part of Jessica’s file. Thankfully, we were aware of our parental rights to get an independent evaluation.

Continuing our effort to get what we felt like was appropriate placement and services, we went to our pediatrician to get advice and find out where else we could go. She referred us and got us an appointment with a Pediatric Neuropsychologist in Knoxville, TN. Two months before Jessica would turn 8 years old, we had our appointment. In a very thorough, eight-page, detailed report, the doctor reviewed all previous history and evaluation reports and then presented his own observations and findings. In his case formulation, he states:

Our next step in the process to get her label changed was to present the information to the school system. Jessica’s father and I sent a letter on June 6, with the pertinent information to the Director of Special Ed. We promptly got a letter back addressing all the issues of concerns we had outlined in our letter. The next steps on their part would be:

Our next IEP meeting was scheduled for August 18, and the addendum was written August 16. In the addendum, the psychometrist states, “Based upon a review of the case files, as well as the current Neuropsychological evaluation, it appears that Jessica does display characteristics associated with autism.”

Oh, really? You think? Hmmm. That only took 4 precious years.

Finally! Progress! Now we just needed to work on getting that ‘highly structured program predominantly specializing in autism‘ that the doctor had said might help her overcome some of her symptoms and meet her potential. Since our school system did not have a program specializing in autism, my mother went to see the school superintendent to discuss bringing in a teacher or specialist for autism.

Well, more bad news… the superintendent abruptly and heatedly questioned the validity of the Knoxville Neuropsychologist’s report–not having read it, by the way–and said before the school system would change anything for Jessica related to autism, their own testing would have to confirm that diagnosis.

NEXT:  Beyond Disappointment: Gratitude