Transition planning and aging out is like worrying about time running out before crossing the finish line.

In March, 2016, the inaugural Chattanooga Marathon will happen. My brother is quite pleased to be designated as “Captain Cutoff.” Participants who fall behind his pace will be considered out of the race and will be cleared off the road so that roads can be reopened. For those people, their goal of completing that marathon will not be reached. 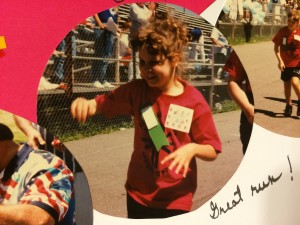 That is what came to mind as I was thinking of the issue of Transition Planning and Aging Out. For many students, reaching
the age of 22 is like running out of time before reaching the finish line. The difference being, the people in the marathon can try again. They can keep working toward their goal and hopefully reach it next time. For students that have reached the age of 22, their public education is over. Unless those students are lucky enough to have families with extra resources, the period of making progress with functional academics is over. 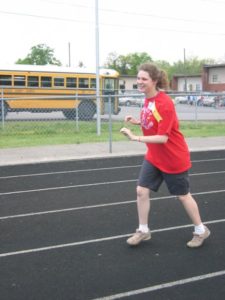 During her last four years of public education, I was determined that was not going to happen to my Jess. Even though there had often been a lack of understanding of her communication disorder, and, she had been grossly underestimated because of standardized testing, I continued to emphasize that she was capable. I promoted my belief that she could continue to learn functional academics, that she had true potential for a real job, and that she could be a productive citizen. At the age of 18, considering we were on the home stretch, I was beginning to feel like time for big progress was running out.

Early in the school year, approval was given for Jess to have an Assistive Technology evaluation by Signal Centers. Jess was learning Braille, and had expressed an interest in learning to use a computer to e-mail friends and family. The purpose of the assessment was to determine the best way for Jess to learn to use a computer and what adaptations she would need.

The ongoing assessment started in December. The recommendations stated that Jess had good potential to learn to use a computer. Her Assessment Team decided that Jessica’s IEP team should
consider including the following technology in her school program.

In January, we got the JAWs program, typing software, and keyboard, for home and school. Individual programs were designed with Classroom Suite for Jess to work on learning the keys and her finger placement on her left hand to find the keys. She was able to use her right index finger when reminded. Some of the technical items were a challenge. In March, at home and at school we were still receiving ongoing guidance with the typing program.

In addition to the new computer and typing programs, Jess successfully continued her Braille instruction for reading and writing.

The other important area being focused on that same school year was vocation. I had resisted a vocational focus for years, but now was definitely the time to start adding that part into her program. Her community based vocational instruction started off at a restaurant. She learned to wipe tables and put them back in order, and to wrap and roll silverware. Most notes from the agenda say that she did well at work. She kept up that gig off and on for most of the school year.

Starting in November, she also occasionally worked at a bowling alley and liked it. Occasionally, she got to bowl after she finished her work. Sometimes her work was wiping tables, and sometimes it was caregiving in the form of helping the teacher with another student. She really enjoyed the caregiving and that would always be her first choice when given the option!

Really positive things were happening this school year. Jess was making progress in important areas. Very importantly, she was enjoying school! How could it be, then, that the majority of comments written in the agenda were not about Braille, reading, math, or vocation?

That would be because of emotions and learning how to cope with them. This tends to be a dominating factor with Jessica’s autism, and I explained in my previous posts, The Paralyzing Effect and Obsessed. Although she was enjoying a great school year, making new friends, and having academic and vocational success, there was a factor mixed in that was even more powerful which threatened to interfere with our race to the finish line. 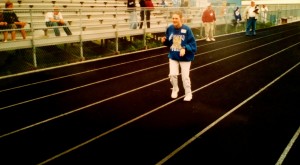