In the past, I used to dream every single night and could recall the dreams in minute detail. A majority of those dreams involved spiders. I would wake at night convinced that there was a spider on the ceiling, slowly spinning a single strand and dropping towards me as I slept.

For many years, I drove my husband crazy waking him up in the middle of the night.

“Look!” I would frantically tell him as I pointed to the spider that he never saw and I always did.

“What is it?” He asked with wide eyes looking around the room for something that wasn’t there.

That usually induced a heavy sigh and an eye roll as it snapped him out of the panic from the startling and rude awakening.

He would the tell me I was just dreaming and to go back to sleep. Then, he would easily roll back over and drop back off to sleep. As the years passed, when I would wake with those dreams, he got used to it and would just immediately move into the “you’re just dreaming” comments. Most of those years, he never convinced me that he was right. I knew he was wrong and I would bury myself under the covers so that spider would have a harder time getting on me. Thankfully, over the last 7 or 8 years, I quit having those dreams. And, as far as I know, I don’t wake up during the night having hallucinations anymore. 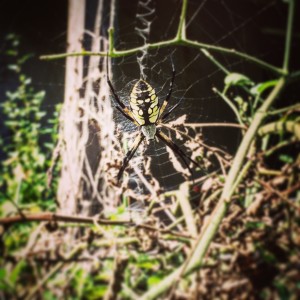 In my latest post, Sadness and Survival, I addressed the sadness experienced after a major failure of Jessica’s Individualized Service Plan. I wrote and shared an analogy to sadness and spider webs. I looked through my pictures and found my spider pictures from last summer to use for graphics for posts. I spent time studying them and editing them in various ways to present them like I wanted. The sadness I felt at that failure was described as the sticky kind

Sometimes, the sadness creeps in like a cobweb gradually being built in a dark corner. It is not noticeable until the lighting is just right, and then it can be swept away with a broom. Other times, the sadness is like walking into a giant spiderweb that was spun overnight. Suddenly, the web is enveloping, harder to clean off because it is intricate and sticky.

Truth is, I have been wrapped up in one of those sticky spider webs like Frodo in Shelob’s web since last week, when I had a meltdown. I was worn down by my lack of ability to sleep, to focus, including completing my own thoughts about anything. Why? Because of relentless exposure to never-ending chatter, happy screams, someone walking the floor at all times of the night, and constant questions. Questions like, “how much longer until 8:00?” “Now how long is it until 8:00?” “How long until 8:00 is it now?” When we reach 8:00, the question changes to how many minutes until 8:30. Then it changes to how many until 9. This scenario repeats itself every… single… morning. The final trigger for my meltdown was the escalating skill of skin picking including mutilated skin and blood. Finding bloody socks, bloody tissues, and bloody bandaids. Sometimes I find drops of blood in the floor and on the bathroom cabinet.

The Reemergence of a Dream

My dreaming issue is anxiety and stress related. This morning, I heard my youngest leaving for work. Since I have been seriously sleep deprived this last week, I promptly fell back asleep. In that moment, for the first time in a very long time, I went into one of those deep sleeps where those dreams surface.

In my dream, I was walking into a room for an Individualized Education Plan meeting (IEP) (or, as SIRI interprets, eye peas). The room was gloomy, poorly lit and had a concrete floor. I was facing the table in the middle of the room when something caught my eye. I looked to my left and there were two rotting bananas in the corner near the door. 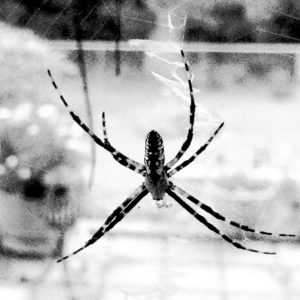 As I looked at those bananas, a spider started crawling out of it. Someone said to me, that’s what you get for leaving those bananas there to rot. Had I left them there? Weird. I quickly moved to do what I do to spiders that are inside (not outside where they belong) and I tried to step on it. Not only was I not able to, but suddenly there was another spider. Then another. Someone let out a mild scream. Had it been me? I backed out of the room and more spiders were coming from a corner in the hall. (This scene reminded me of Harry Potter and The Deathly Hallows Part 1, where Harry, Ron, and Hermione were in Bellatrix Lestrange’s vault in Gringotts bank and everything they touched multiplied, then the items that touched each other multiplied.) I screamed more, and someone came out of the next room to see what was wrong.

Thankfully the next thing that happened was that my dog came and woke me up. Whew!! A few minutes later, I got a text from a friend who said, “Good morning. Tomorrow is gone, Today is a new day, and it is going to be excellent.

I decided to believe that. I laughed at the dream and decided to pull the rest of that sticky spiderweb off and move on.