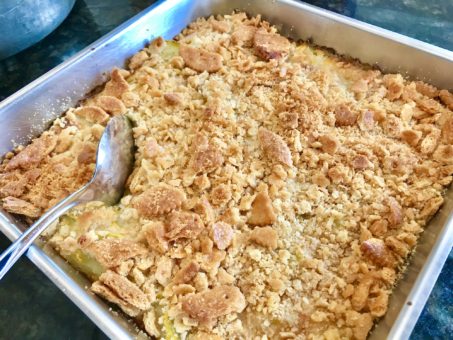 Scroll down for recipe

Hello #goodones ! “Cooking with Nonnie” is finally here, and she and Jess make Squash Casserole ! Despite some struggles, Jessica’s interest and participation went far above and beyond what I expected.  There is so much I want to point out in this video.

This video inadvertently has the best example of Tactile Defensiveness that I could have ever hoped to capture on video. You may wonder how Tactile Defensiveness presents in Jessica. She has a severe sensitivity to certain textures, sensations, and pressures. I believe you’ll see it without me pointing out all of the incidences, but it involves a lot of the ingredients (and some heat) and is frequently followed by hand washing.

Cooking with Nonnie Squash Casserole
Watch this video on YouTube.

Throughout the video, you can see a distressed look on Jessica’s face, along with the occasional flared nostrils. Jess loves squash casserole but the smell of the individual ingredients was quite offensive to her. However, she persevered even while she was having sensory overload from the smells.

Fine motor weakness, lack of coordination, and tactile defensiveness stands in the way of Jess doing many of the actions independently. Some of them she will go for it and do the best she can, while for other actions her way of participating is to hold Nonnie’s hand or wrist. We actually do this reverse hand over hand a lot of the time during creative activities so that Jess can participate without fear or severe anxiety.

Curious as to what Jessica’s favorite part was? Crushing the crackers and sprinkling them onto the squash casserole, which also happens to be the best part of the casserole, lol. 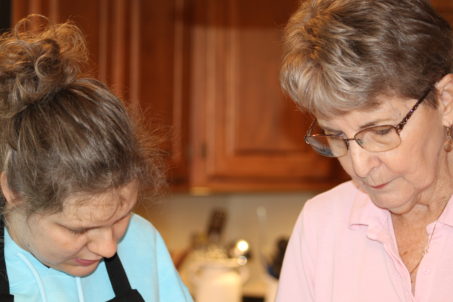