Thrilled with this news, I risked a repeat visceral reaction by going with Jessica’s teacher to take Jess to tour the school (referenced in What I Never Wanted) around mid March. The visit went so much better than I could have ever imagined.

We asked lots of questions and had extensive discussions about BUILDING an individualized program (ahem – ISP=Individualized Service Plan) since Jessica is so unique and does not fit into a classic setting. Things that were really important included opportunities for helping and caregiving. The importance of finding the right teacher/classroom placement for success was continually emphasized by us.

Their sheltered employment program was not something we wanted Jess to participate in at that time. We were told she could be placed in a room where she could be utilized as a helper and even go on field trips to ‘help’ other clients. We made sure to clarify that while at the school Jessica would be allowed to take her phone, keep it with her, and use it to call me as she needed. Because of her communication disorder, her ability to call me for help was a critical need for her.

Jessica was excited and loved it. She wanted to go to the school three days a week. Knowing there were  required assessments and an ISP meeting, she began asking me every day, multiple times a day, when those would happen.

At the same time, I was in the midst of another job change. Originally, I had worked three 12-hr shifts per week on a cardiac telemetry unit. 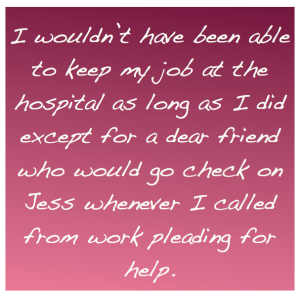 The environment was intense, fast paced, stressful, physically demanding, and often life or death scenarios. In an effort to have a more routine schedule, in April 2013, I changed to five 8-hr days in an endoscopy center. It was slower paced, less physically demanding, and less stressful. Only after making that change did I learn I was required to sign up for at least two late days per month.


I enjoyed that position for a year, but I just could not continue to be gone from home that much. Continuing my effort to balance work with caring for Jess, I moved on to the next job. It was Monday-Friday, 8-5. The bonus was that it was located only 7 minutes from home and included an hour lunch break.

Before we could even have our school planning meeting, Jessica had to complete yet another assessment through DBHDD. That took place on March 28th, and a few days later Jessica’s support coordinator contacted the school to get the meeting scheduled.

A month passed, and we got no response from the school. Even though she had been looking forward to starting to the school, Jessica very quickly began having anxiety about things being in limbo. She even started urinating in the floor a couple of days per week, which created more stress and anxiety for all of us. 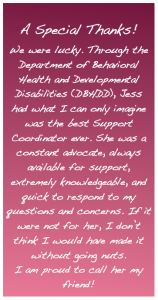 I sent an email to the support coordinator

“I’m beginning to wonder if we picked the wrong facility and need to start looking elsewhere. I know other options are limited, but we’ve been waiting for this for 2 years now, and we are ready to get going. Based on lack of response from the school it seems they are not that interested in Jessica or our business. Thoughts?”

“I have emailed the school again asking when we can schedule an ISP meeting but haven’t heard back yet. I think the school is just very particular about getting the right supports in place for their individuals. I have dealt with this time-lapse with other individuals as well as Jessica.”

After multiple episodes of communication lags and difficulties, we had the meeting toward the end of May. On June 2, when I received notification from DBHDD that everything was ready, I took the first step and emailed the school to ask when she would be able to start.

They were waiting for transportation to give a date and time but suggested bringing Jess back in to visit some classrooms and teachers to make sure she was put in the right setting. I was not available to go, so the next day Jessica’s former teacher took her to meet a few more people.

Again, there was extensive conversation about the vital importance of placement and a smooth start.

Two years after climbing over the paper wall for the waiver, Jessica was scheduled to start *school Monday June 16, 2014. Three days from the start date, I had ZERO details. I emailed the school and asked who Jessica’s teacher would be.

The answer floored me,

“I am not sure who her teacher is….I know that she is in classroom X…..maybe I can look at a list Monday morning and figure it out…”

Okay, wait a minute. What?

That morning, I talked with the two main people who had been working with us on this plan for two months. Neither one knew whose classroom Jess was going to be in?! Even though there had been discussions at every step of the way about the importance of right teacher and classroom? It had not been ‘just a parent’ saying that either. An educator with 40-years experience in special education who had Jess in a self-contained classroom for four straight years had also emphasized that.

I was extremely disappointed and did not have a good feeling about things. But, we had been waiting so long. Plus, I was three months into a new job and needed care for Jess! One week later, I was scheduled to go on a mandatory 4-day out-of-town educational work trip that could not be rescheduled.

This was really cutting it close. It had to work out or I would lose my job!