Is Christine a Real Person? We found out much too late that some things were fundamentally wrong with Jessica’s experience at the school for the blind. It is difficult to even put those items in any order. Because of her communication disorder, she was not able to come home and say, “Mom, guess what happened this week?”

Therefore, many of those, we did not know about until a good while after she stopped attending school there. As time passed and at random times, she would tell little pieces of things that had occurred.

One day in an IEP, Jessica’s teacher inquired, in a very haughty tone, if “Christine” was a real person. Let me clarify up front that Christine was indeed a very real person. Jessica would go with Granny to visit Christine on a periodic basis. Jessica LOVED Christine and was very focused on her in an OCD kind of way. Christine had some health issues and it gave Jess a reason to take care of her. Jess talked about Christine all the time. “Yes, of course,” we answered. 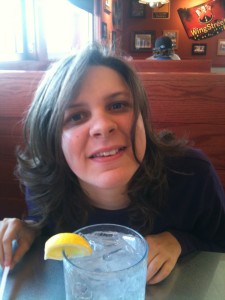 The teacher proceeded to ask us, as if we were completely oblivious, “Have you ever met Christine?” implying that she was imaginary. We answered, well, no, we had not met her, but we knew she was Granny’s sister-in-law’s sister. Jess even had a picture of her.

Dismissing our remark, the teacher then said, “But, have you ever talked to Christine?” Again, based on the smirk on the teacher’s face, it was a direct implication that Jess had fabricated this entity. No, we had not talked to Christine. It was a distant connection and part of Granny and Jessica’s outings, not ours. We re-emphasized to the teacher that we knew she was a real person, which was a ridiculous thing to have to prove. The look on her face, the tone of her voice, and her condescending attitude told us that she did not believe us. Maybe she thought it was a conspiracy, that we knew ‘the truth’ and were hiding it. She then proceeded to talk to us about concerns that Jessica was psychotic. Referring to the fact that Jess talked to herself all the time, and talked about Christine, confidently she informed us that Christine might be Jessica’s alternate personality.

Oh, brother!!! Seriously??? What are we supposed to do with this kind of remark? Laugh or cry? – Neither. We were bewildered, and extremely insulted. It was the most ridiculous thing we have ever heard anyone say about Jessica.

1.
the act or practice of talking to oneself, either aloud or silently and mentally: positive self-talk
Contemporary definitions for self-talk
noun

anything said to oneself for encouragement or motivation, such as phrasesor mantras; also, one’s constant internal conversation

Did she not know what self-talk is and how it can be used to work through things? We all have an internal monologue (self-talk) but the majority of times when we are around other people we do it within our head, not out loud. Jessica’s self-talk was/is aloud. We had described this behavior in meetings prior to starting school, and explained how much it helped Jess work through things that were bothering her. The self-talk also gave those around her clues to what was bothering her. If it were not for her self-talk, we would rarely know what was going on with Jess. We had talked to the school psychologist about it during her initial evaluation the previous summer, and it was even explained in the psychologist’s report.

This meeting should have been over right then. Obviously, the teacher had no clue about who Jessica really was. She saw zero potential in her. Jess was apparently just a thorn in her side. However, no one at the school had informed us that there were ongoing problems. No one had suggested she was in distress. So, unfortunately, we were still not listening to our gut. We were still trying to view it as still being in the adjustment phase and were still hoping it was a good opportunity.

Turns out, that was only because Jess had not been able to express to us what was happening in the classroom. We did not know that she cried all the way back to school each Sunday. We did not know how hard the teacher had been trying to break her into conformity. We did not know she was experiencing what was, for her, a living nightmare.

The real nightmares? They started a couple of years later.

From Wikipedia, the free encyclopedia
Not to be confused with Night terror. For other uses, see Nightmare (disambiguation)
A nightmare is an unpleasant dream that can cause a strong emotional response from the mind, typically fear or horror but also despair, anxiety and great sadness. The dream may contain situations of danger, discomfort, psychological or physical terror. Sufferers often awaken in a state of distress and may be unable to return to sleep for a prolonged period.1