Yes, I had a normal pregnancy and normal delivery. Jess was born very near her due date with a beautiful round head, blonde hair, blue eyes, and weighing 7 lbs-9 oz. She was a really good baby.

Jess was my first child, and the first grandchild of the family. In retrospect, maybe we would have noticed signs that things were wrong earlier if she had not been the first. My mom is very perceptive and sharp and was the first one to notice.

Over time, my mom developed a slight concern about something not being right with Jessica’s eyes. Consequently, I took Jess to the doctor at the family practice where I worked. On two separate visits, the doctor told us that probably her vision had not yet finished developing. The doctor suggested we wait until she was 4-5 months old before pursuing that issue further. In my young and naive mind, we were being told we were worrying unnecessarily, everything was okay.

What does ‘ somethings not right with her eyes ‘ mean?

Jessica’s eyes were beautiful and looked normal. She seemed to look everywhere – except at the things we wanted her to look at. People would frequently mention how much she must like the patterns on the floor. For some reason, Jess wouldn’t maintain eye contact.

Eventually, we took Jess to an ophthalmologist. She was 6 months old. Without success, the doctor tried engaging Jess with several items. Then, all the lights were turned off and the room was completely dark.

Jess was sitting in my lap facing away from me during the exam. Across the room, my mom was sitting in a chair and facing us. In the darkened room, the doctor turned on a flashlight. It was the only thing in the room that could be seen. She pointed the flashlight towards Jess and made designs in the air, moving the light in all different directions.

What Was The Reaction?

Because, there was not a reaction to be seen. The doctor didn’t say much to us but said that Jess needed further testing. She sent us to Chattanooga’s Children’s Hospital to get a CT of Jessica’s brain.

The CT was taken and we were sent to the radiology waiting room. Shortly, we were handed a phone through the reception window. Our pediatrician was on the line and asked us to come to her office and bring the films with us.

Mama and I were seated in the pediatricians office. Jessica, 6 months old, was in my lap. The doctor came in and sat across from us. Very soberly and without hesitation, she said, “Your baby is blind and forevermore will be.” 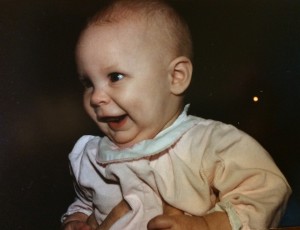