WHEN GIVING YOUR ALL IS NOT ENOUGH 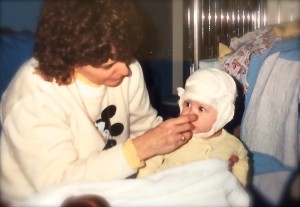 From the moment of diagnosis until she aged out of school, my goals included convincing others of Jessica’s potential, ensuring she got the best education possible, and having her ready to be a productive citizen. I gave those goals my all. 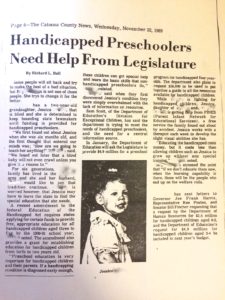 I was always sure that there was something out there for Jess. A unique fit somewhere. She has so much to offer. I never considered the option that there would not be a place. 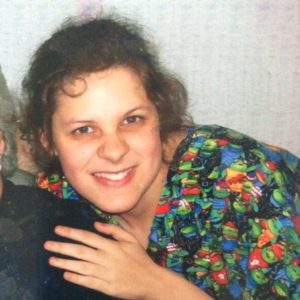 While Jess was busy with her last few years of school prep, I was working on my own dream to obtain a college degree. I was scheduled to graduate in early May and would have a job lined up by the time Jess graduated at the end of May. All the while, Jessica’s job would be ready for her for when she graduated. 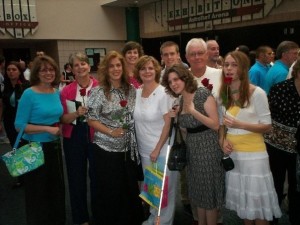 My Own Job Was Going to Depend on Jessica’s Job

The closer we got to graduation, the more the bumps in the road shook me up. When things were going awry like they did with the school for the blind and Goodwill, I began having lots of anxiety. I felt at a loss about what I would do if Jess did not become job ready by the time we both graduated. I would have to go to work, so what would I do with Jess if she wasn’t job ready? 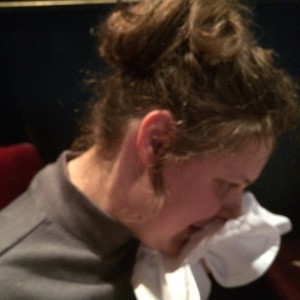 As I was stressed about how to manage life after graduation, a counselor simply said, “all you have to do is have her able to safely stay at home by herself, right?” I have to say, as obvious as that seems, that had never occurred to me because I always had higher expectations and plans. We shifted some of our efforts towards creating a safe and functional environment where Jess could care for herself when I went to work and she was home by herself.

Quite disappointingly, the nursing home gig did not work out. Once the personnel support from the school system was out of the picture, it was too complicated to keep smoothing out the wrinkles. The two issues I mentioned in my previous post (hiring freeze and anxiety) were a large part of the failure. It mattered to Jess that she did not have a paying job. She wanted to work for a pay check. Once she knew she was not getting hired, her motivation to work through the stress and anxiety of transportation and facility issues faded away. Finally, out of self-preservation, she decided to quit going to volunteer at the nursing home. This coincided with the start of my nursing career.

Thus began a long-term challenge of arranging care for Jess. I worked three 12hr shifts per week. We went to great lengths to plan out 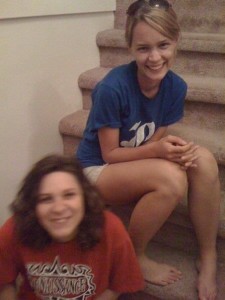 props for Jess, including putting meals in the microwave for her to heat up for lunch, identifying her clothes for the day, medication reminders, etc. On my work mornings, I left at 5:45 a.m. Before Hannah left for school, she would get Jess up, help her dress, feed her breakfast, and put her lunch in the microwave. Then, except for during marching band season, Hannah came home after school and fed Jess supper and kept her the rest of the day. I usually didn’t get home until about 8pm. Hannah was super generous and awesome and never complained about it cramping her style.

Sometimes it went okay, and a lot of times it did not. One day she decided to have a water day in her room (thankfully her room was in the finished basement.)

This is what a water day looks like…outside. 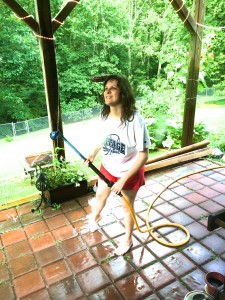 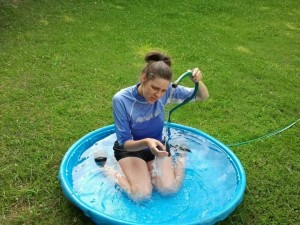 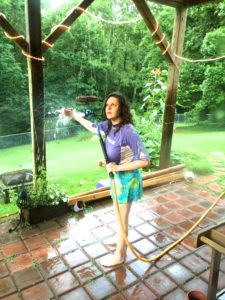 Inside, she substituted the hose with a pitcher of water… that she refilled… multiple times.  She was quite proud of herself.

Another day, she called me at work to tell me she had forgotten to take her medication the day before, so she took two of them to make up for the one she forgot. I had to leave work to go home and keep an eye on her the rest of the day. If something went wrong, like her CD player wasn’t working right, or she dropped something and couldn’t find it, she might call me 10 times in a row.

It became clear that Jess routinely staying home by herself for a full day was not going to be practical. I tried to arrange my work schedule so that I worked:

I had a kind and understanding nurse manager, and most of the time I got the days I requested. When I did not, it created a serious hardship. Usually, the reason I would not get one of the days I asked for would be because there might be a nurse with a baby who had a childcare need on the same day. While I understand that there is no reason for me to get priority on that, it was frustrating considering my lack of options and the related health and safety concerns. So some weeks, there were days that I could not find care for Jess during the day and she had to stay by herself.

It was not a good situation, and a solution had to be found.