Jess needed surgery, but the neurosurgeon wasn’t on board…

We were lucky. Our pediatrician was as fierce of an advocate as there ever could be. She didn’t back down and the neurosurgeon agreed to perform the surgery. Jess was admitted to Children’s Hospital on February 11, 1988 with a Ventriculoperitoneal shunt placement scheduled for the next day.  The diagnosis of blindness, the CT, the eye exam, and scheduling surgery, all had occurred in just over a week.

Everything went fine during surgery. Afterwards, the Neurosurgeon came to talk to us. He seemed almost mad, as if he felt pressured into the surgery and was mad about it.  His basic comment to us was, “Well, it’s in there (the shunt). I don’t think it was needed, and I don’t think it will change anything.” However, during subsequent visits at the clinic, this same doctor absolutely fell in love with Jessica (of course) and was quite intrigued by her. He somewhat quickly changed his opinion about the shunt making a difference.

I remember going to recovery to see her after talking to the Neurosurgeon. All of it felt surreal, and was really distressing. In recovery, she was laying in a little bed, still very sedated, but crying anyway. The kind of cry that made it seem like she had been crying a long time. I wondered how long she had been crying. Was it because she was in pain, scared, or just because of the sedation? Not knowing made me ache. I wanted to hold her but couldn’t yet.

She had three incisions. One on her scalp, one behind her ear, and one on her abdomen. Her head was wrapped up in a bulky dressing.

Being as cute as she was already, could it be possible that she was even cuter with the dressing on her head?

The dressing didn’t have to stay on long. Once it was off, we saw an almost ½ shaved head, a relatively small incision, and what looked like a huge lump under her scalp. For a while, it looked very prominent. But, as her head grew and her hair grew back, it wasn’t noticeable. There were many times, though, that people would incidentally feel of her head and then tell me in alarm that she had a huge knot on her head.

Did the Shunt Make A Difference?

As sometimes happens with major personal events, the world temporarily grows small and everything seems to revolve around our own little world. The outside world seems to fade for a while. For the next few months, we worked on finding our new normal. We have a very large and close extended family and part of our long time normal was getting together with family for special events, like birthdays. We had one such occasion within a few months of surgery.

During this party, we had the joy of witnessing the first encouraging and exciting moment that we had experienced since we had heard the devastating diagnosis of blindness. 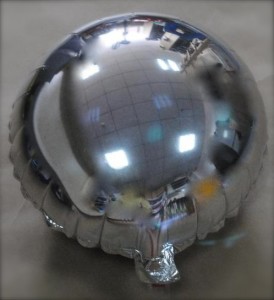 While we were standing around talking and a cousin was holding Jess, someone held out a small metallic balloon on a stick.

Jess turned her head toward it…and she REACHED for it! Maybe it caught her attention because of all the reflections of light in the balloon. As far as we know, it was the first thing that she could ever see. We were overjoyed!

Just maybe that shunt was making a difference after all…

Next: Champion of Advocacy