Jess has nightmares. She has had them most of her life. But very early on, they were different. When Jess was a toddler, the doctor explained to us that Jess was having ‘night terrors’ which are different from nightmares. When she was having night terrors, she would wake during the night screaming and crying, pacing in her room, non-responsive to our efforts to comfort and console. We would just stay with her until it passed enough to get her back to bed. She quickly outgrew the night terrors.

AFTER she stopped attending the school for the blind.

Once they started, they continued. For YEARS! At first, they were frequent and intense. When Jess would have one of those nightmares, it was always very specific to a teacher at the residential school. We often had difficulty consoling her and convincing her it was just a dream and that she did not ever have to go back. Even when we would be traveling, and passing through that area, she would get very stressed and worried that we would go there. After several years passed and she was having much better experiences with school, the nightmares were less frequent.

However, 15 years after being there, she will still occasionally bring up that teacher’s name when she is having a bad day. 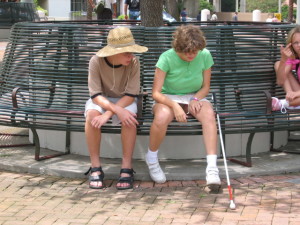 I vividly remember the day Jess was able to tell me about being punished at mealtime by not being allowed to eat. I felt pain inside and true nausea the day Jess told me that sometimes at lunch she was punished by being made to sit at the table while the rest of her group ate. I have no idea what that punishment would have been for, but that was so cruel. The school never informed us of behavior issues or the punishment.

THE HEARTBREAK OF COMMUNICATION DISORDERS

This is a prime example of a heartbreaking consequence of living with a communication disorder. Jess was not able to tell us that was happening. It was many years after she stopped going to the school for the blind that she started talking about it. How many times had that happened? We’ll never know. To this day, Jessica is always focused on making sure she does not miss a meal or that no one takes her food from her plate.

We have had personal experiences with Jess wandering. Considering that history, and our personal fear of literally losing Jess, imagine how we felt when Jess eventually told us that for punishment her teacher would make her stand out in the hall by herself. Jess told us that at times, when the class would take a break outside in the courtyard, she was made to stay in the classroom by herself for being bad. Leaving Jess by herself for ‘punishment’ was dangerous and cruel. I wonder how many times that happened?

We will never know how many other cruel punishments Jessica endured. It still breaks my heart.

Oh, how we wish we had known what was happening while she was still there. It was so incredibly sad to us that we did not find out these details until she was no longer attending that school.

We may not have known what was happening, but someone did. Very lucky for Jess, there was a wonderful person there on campus that was witnessing the cruelty for what it was. Someone that wanted to rescue her from that classroom. But she had to do it without exposing the teacher, and without getting in trouble and putting her own job at risk. Much later, when it was safe to let us know, this angel let us know with only a vague explanation how she had seen that Jess had to be rescued and how she went about doing it.

I wish that we had of known – that Jess had been able to tell us way back then. We would have rescued her so much sooner.  Why are people horrible?

If you haven’t read The Awkward IEP, and Lost Opportunities, please go back and read them. They are an important part of this story line.