The term “loquacious” was used to describe Jess in a Speech/Language report that was written when she was 4-years-old.  Sounds good, right? There was a ‘but’…

“Despite Jessica’s loquacious behavior, much of her talking was self talk, rather than other person oriented. Her language was estimated to be within the upper two to three-year range, and her articulation skills were developmentally and chronologically appropriate.”

I credit Early Intervention with making a huge difference in Jessica’s life and ability to articulate. Jess was diagnosed with a congenital brain malformation when she was only 6 months old. Soon after, we begin Early Intervention services through an organization whose emphasis was on training families of newly diagnosed children birth to five years of age with vision and/or loss of hearing. We had wonderful parent advisors that worked with us in our home for several years.

By the time she was 2-year-old, she had an impressive vocabulary. The number of words she could articulate was beyond what would be expected for any 2-year-old. When she did put sentences together, they sounded like adult sentences because we had been talking to her in an adult format her whole life.

Thankful as we are that she is verbal, that didn’t mean she could adequately communicate. While I could communicate with her just fine, outsiders could not. I knew how to arrange my sentences to get a response. During evaluations, she would often be asked questions such as, “What is your name?” When Jess would not provide an answer or even acknowledge the question, I was repeatedly informed that Jess did not know her name.

The thing is, Jess did know her name, and lots more. But to get a verbal response from her, the question had to be asked in a fill-in-the-blank format. If I got her attention and said, “Listen, say, ‘my name is ___’ then she would say “Jessica.”  If someone said, “What is your favorite food?” Jess wouldn’t respond. But, if it was proposed as, “My favorite food is ___,” Jess would answer, “Pizza.”

I’m not sure why it was this way. One thing I have wondered is if it was because she also had what was referred to as ‘pronoun confusion’. It was most definitely confusing to those that didn’t know ahead of time. Throughout her childhood, teen years, and beyond, Jess has continually struggled to express ‘why’ ‘what’ and ‘how.

As with other things in Jessica’s development, I do see progress with her ability to express herself. But, it’s also likely that the progress I perceive is because she is with me so much of the time, and I know what’s going on most of the time, so I understand what she’s expressing (or not expressing.)

Please let me know if you have specific questions related to this topic. 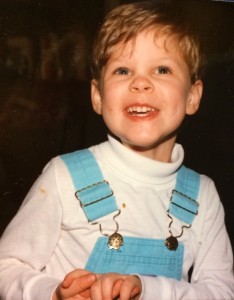