Do you think it matters? Does it matter that a person with autism, developmental delays, and vision impairment cannot read Braille?

So, what happens with an autistic individual who has a vision impairment? Simple. It complicates learning. That does not mean it cannot be done. It just means it takes creativity and patience. Early on, Jess was on a path to learn Braille. She worked on pre-Braille activities for several years, and made good progress. So, what changed?

When I review some old weekly progress notes and IEP meeting notes. I was pleasantly reminded of one of Jessica’s early, open-minded, positive-thinking, vision teachers. One n 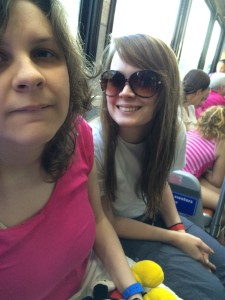 ote specifically said how quickly Jess was moving through the pre-Braille instruction. As I read on, one of the things that struck me was the stark contrast between updates written by this teacher as compared to the next vision teacher.

The open-minded teacher wrote notes stating all of the things they were working on together, the progress she was making, and describing her ABILITIES. The notes written by the successive teacher had  comments that seemed to predominantly describe her INABILITY to make progress, and what all she could not do.

That is THE difference. Attitude. One person: open-mindedly worked with Jess and viewed progress as progress. Another person: discounted Jessica’s abilities because she learned differently, and her progress was not standard. One person had optimism; one did not.

After having worked only on pre-Braille skills, when Jess was 6 years old she could identify the beginning and end of a Braille row, track one row of Braille using both hands, and discriminate Braille shapes. She was familiar with the Braille writer and knew its name and function.

A year later, after having been working with a different teacher for approximately 5 months, on her Present Level of Performance there was no mention of Braille. Period. Then, another year later, the recommendation said:

X –  Instructions in Braille is not indicated for this student.

In a follow-up meeting months later, the committee reconvened and it was agreed that we would not give up on Braille instruction. However, with a teacher that did not believe Jess could learn, it really did not change much. Eventually, Braille instruction was written back out of her IEP altogether. I was not able to get it added back in until 2005, when Jessica was 18 years old.

And why am I still stuck on this topic after all of these years? Because, Jessica wants to know how to read.